Back from WV and How I Spent Some Time There

Spending Time In My Hometown 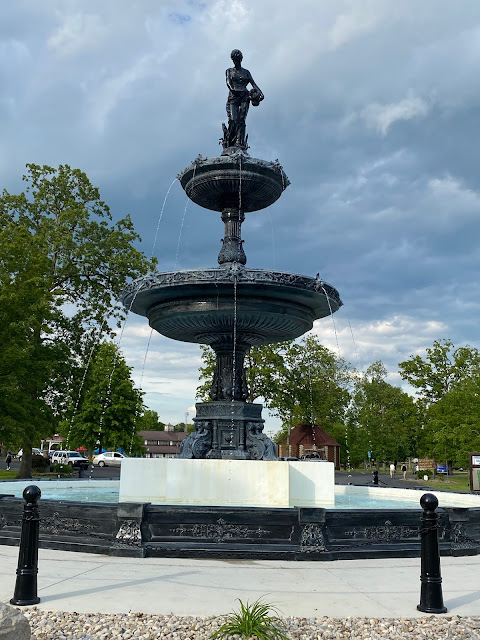 Hi everyone!  I'm back from a two week visit to see my family in West Virginia.  Although the visit was only meant to be for a week, due to the gas shortage that hit right as I arrived in my hometown, The Mr. and I decided it would be best for me to stay an extra week and let the shortage calm down so he could return to pick me up. The second week was a blessing in disguise as I was able to do more with seeing family and spending time with them as well as helping out my oldest sister more. While I was there I snapped some photos at my sisters' houses and around town and I'm going to share some of my trip and some of my hometown with all of you. Hope you enjoy! The above pic is of the fountain that greets visitors at the City Park in my hometown. The statue is called, "The Lady of the Lake," and is a new statue. There has always been a statue at the park entrance, however. 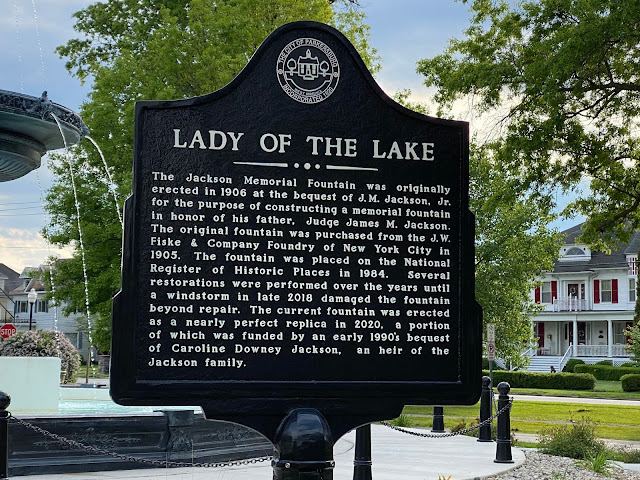 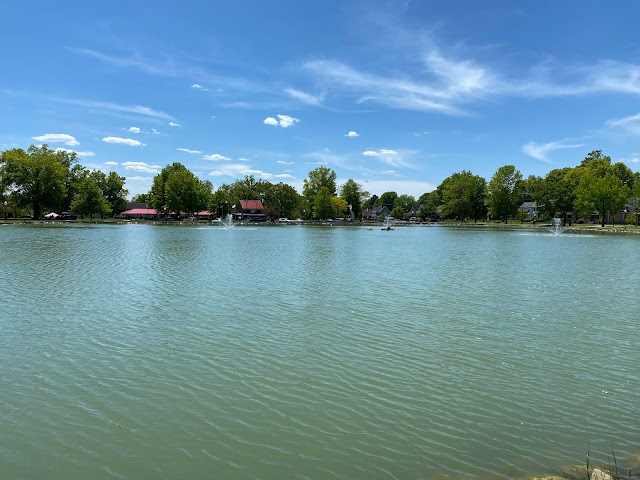 The City Park is a large park with lots of amenities for visitors from picnic shelters to an antique museum to a large swimming pool and tennis courts to the lake you see here for fishing and walking around. I spent a lot of time here growing up and it always brings memories when I return home. I haven't seen this type of park in Asheville or other places. As a child I came here to swim and feed the ducks in the lake. As a teenager it was fun driving through to see if any cute boys were playing basketball or hanging out. And speaking of cute boys.... 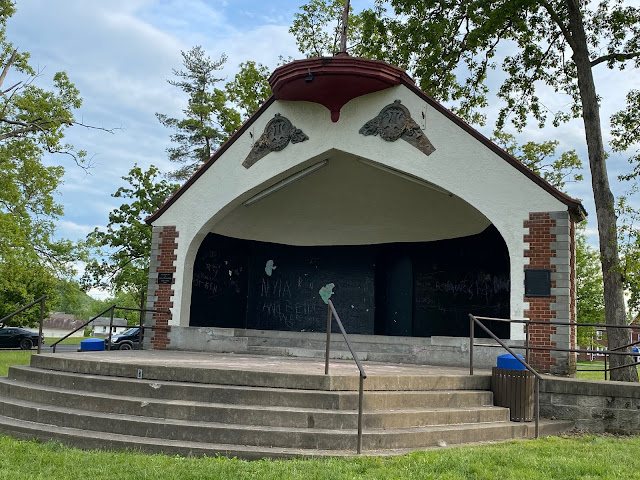 This is the bandshell in the park where The Mr. and I first saw one another when we were playing for the summer in the park music series as junior high schoolers. He was playing in the orchestra I played violin in and we caught sight of one another. Years later we re-connected in high school and the rest, as they say, is history! It looks like the bandshell could use a coat of paint inside, but otherwise it is in good shape. 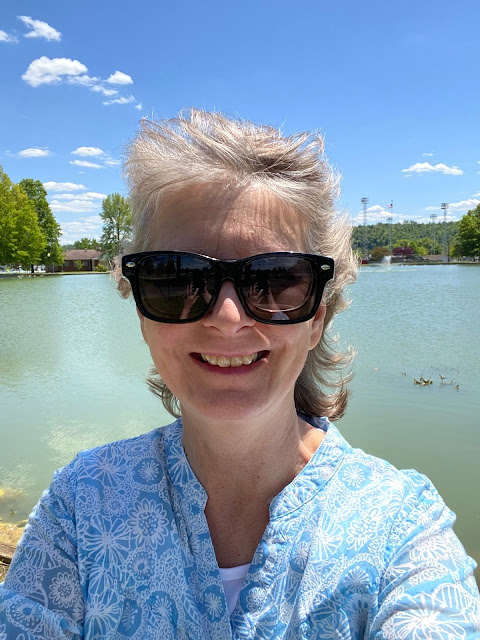 I took a selfie as I walked around the lake. 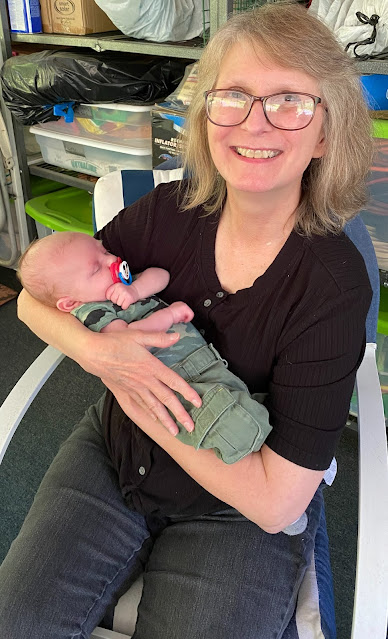 Now this little man is one of the reasons I was so happy to be home. Of course I was thrilled to see ALL of my family after over a year. But this little guy is my brand new great-great nephew! I got to hold him several times and he is such a bundle of joy. 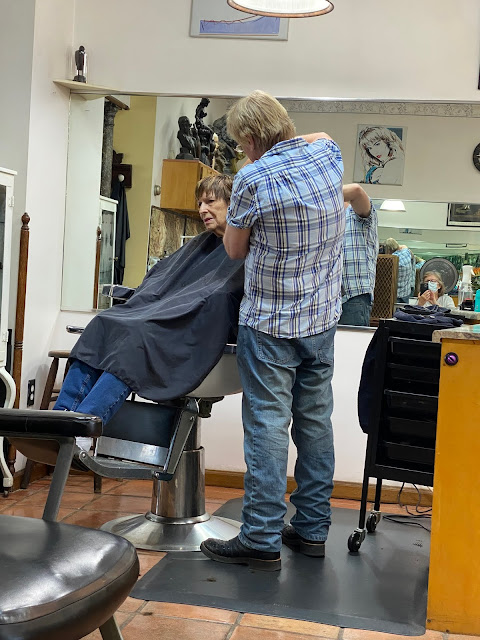 One of the things I did with my oldest sister was take her to a hair appointment. I have heard about her stylist for years but had never met him or seen his salon. My sister fell and broke her wrist a few weeks ago and can't drive so I was the designated driver while I was in town.  I am blessed with four sisters and was lucky to be able to spend time with three of them on this trip. Unfortunately, one sister was unable to travel to be with us this time. Hopefully soon, though, we will see her! 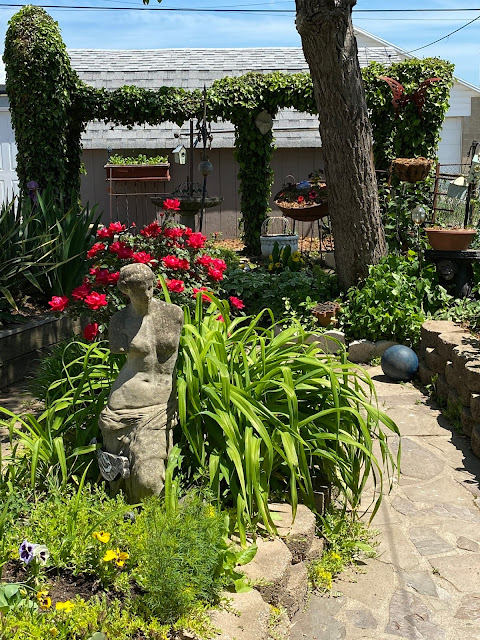 The hair studio has a really pretty garden in the back so I snapped a photo of a part of it.  The stylist is also good at growing flowers! 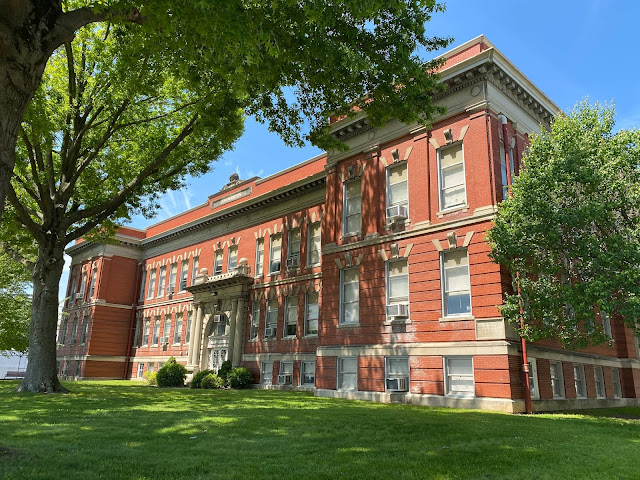 While my sister was getting her hair done I walked across the street to take a few photos of my old elementary school which was closed down about a year ago. Isn't this a gorgeous building?!  I went to school here in grades 1-6. I didn't go to kindergarten as it wasn't required years ago. 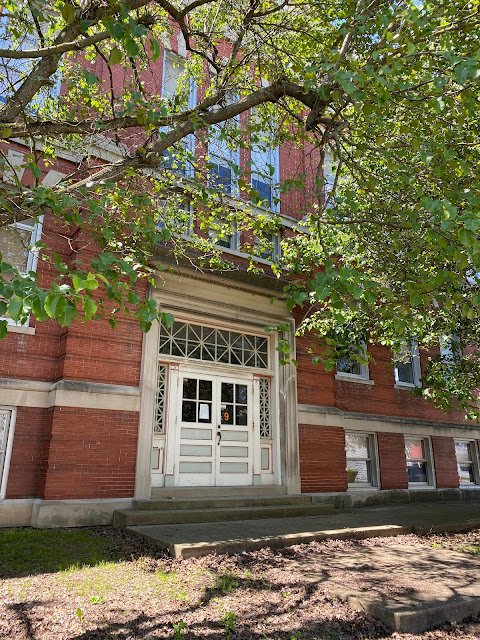 How many times I walked through these doors when I attended McKinley Elementary! The trees have pretty much grown across the front of this entrance as I guess no one is maintaining them anymore. 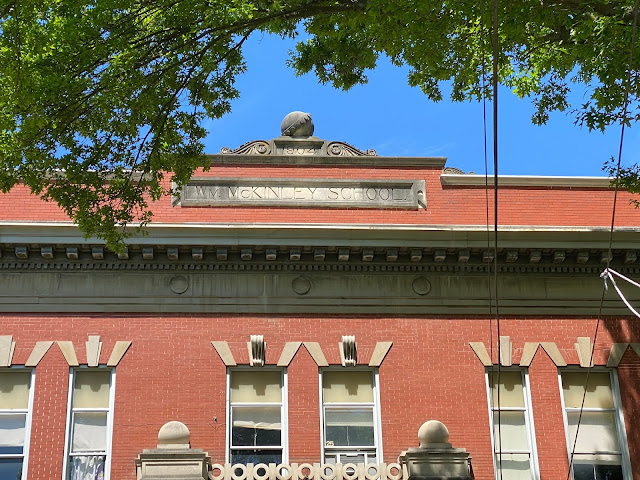 As you can see, the school was built in 1902.  The building was sold at an auction and the buyer has promised not to tear it down. We'll see. I can remember when all of the windows were adorned with pictures that students had drawn or colored. Now, the windows are bare. 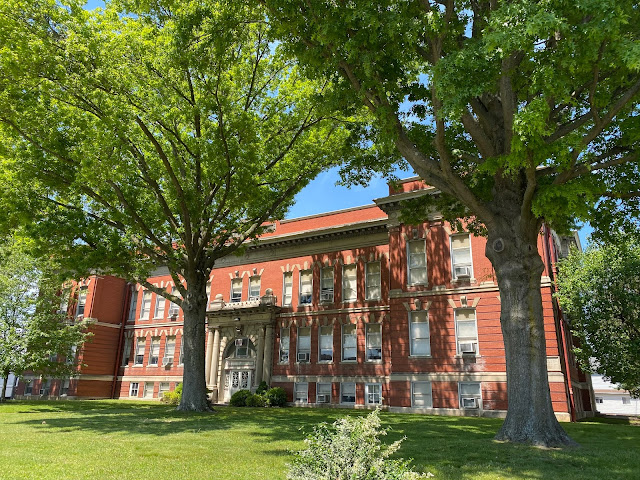 When I attended school here, there was a "Lawn Fete" held every year on this front lawn. I looked forward to it so much! I loved the fishing booth and the little prizes they would put on our fishing pole! 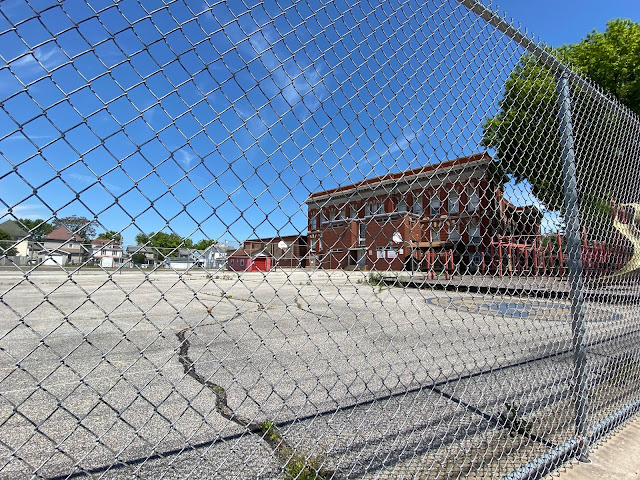 There is nothing quite as sad as a playground standing empty and no longer being used by running and playing children!  When I went here there were gravel and grassy areas and two big trees way across the playground that were wonderful for hiding and playing around. Of course there were monkey bars and I earned many callouses going across them! I wonder what they will do with the playground equipment? Of course, the monkey bars I played on are long gone! 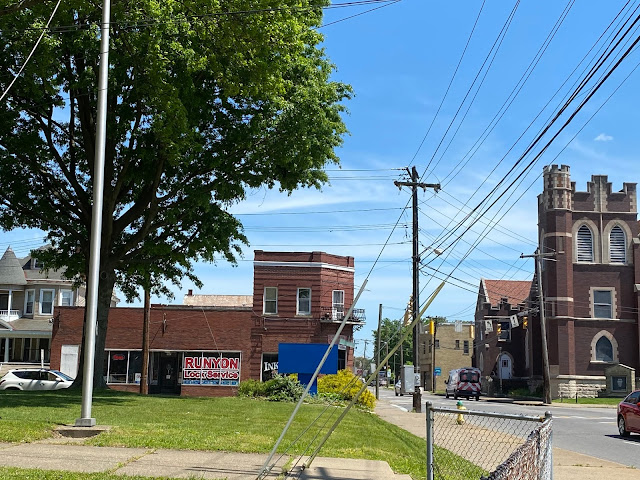 On down the street is what used to be the corner drugstore.  Now, it is a tatoo parlor of all things! I can still remember the smell of the drugstore, though, when I would open the door and walk in to buy nickel candy bars. I didn't get to do that often as I lived in the country and was bussed to school. But, for a few months, I actually lived across the street from my elementary school and so I was able to visit the drugstore then. 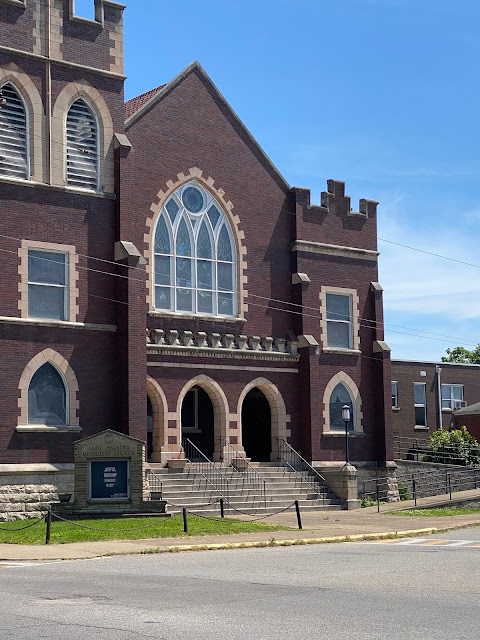 Across the street from the old drugstore is beautiful St. Andrews United Methodist Church. It isn't the Methodist church I attended growing up but it still holds fond memories of youth group meet-ups. I didn't take a picture since the building no longer exists, but across from St. Andrews used to be the old Burwell Movie Theater where The Mr. and I would go for dates. I think that is where I saw Star Wars the first time.
Here's a pic I found of The Burwell theater. Can't believe it was torn down. Such a shame. A Walgreen's Drugstore is on the site now. Isn't it sad when buildings aren't preserved?! 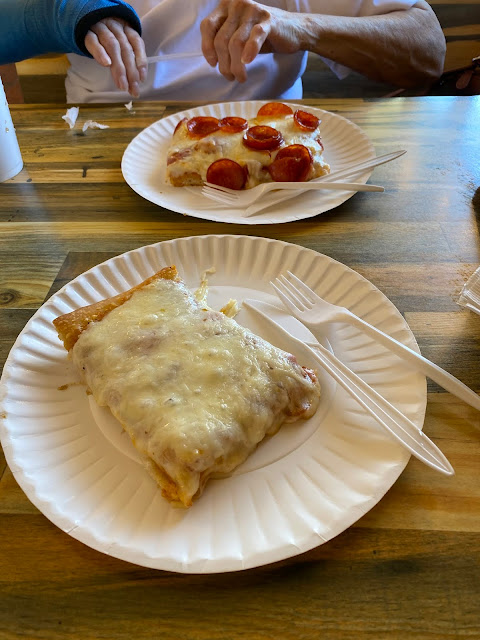 Anyway, after my sister got her hair done we went to a pizza place right around the corner for lunch. This pizza was SO GOOD! I admit I went back for a second slice! 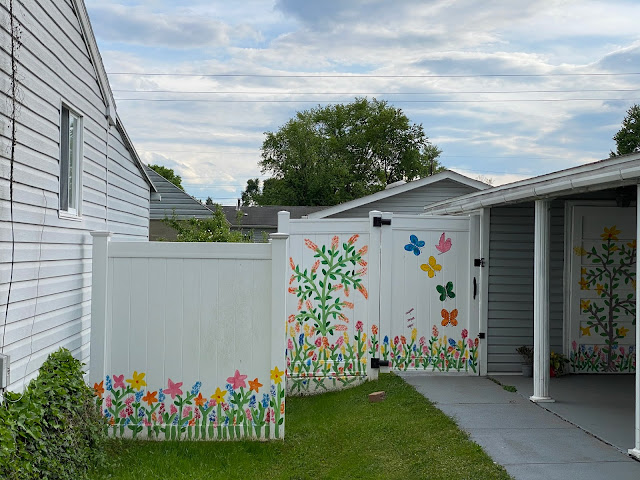 This is the fence that is next door to another sister's house. The lady that lives there is very artistic and painted the outside and inside of the fence. I had to take a picture because I thought it was so pretty! It is like having a flower garden that you don't have to plant or water! 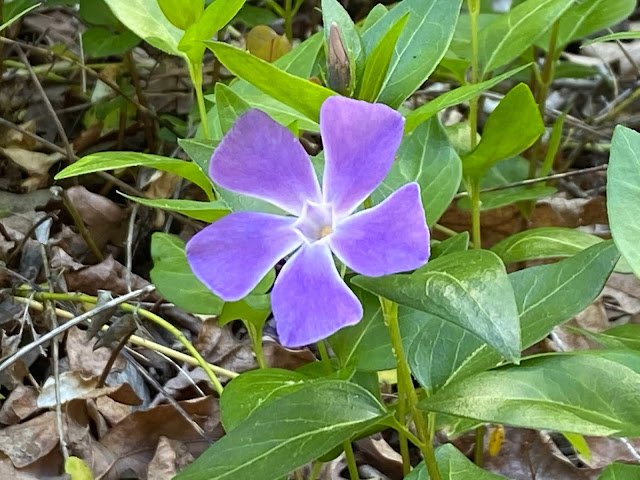 And this is a pretty flower at my oldest sister's house.  She lives in the house that I grew up in and her yard has some pretty and interesting things. These flowers are one of them. 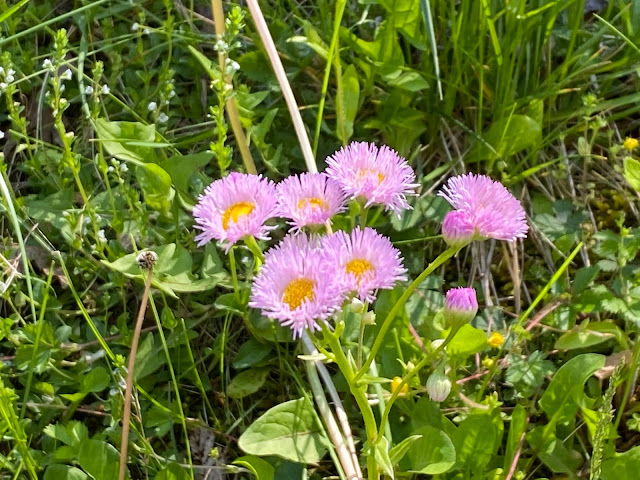 These may be weeds but they are still pretty.  Unfortunately, the man who cuts the lawn cut them down soon after I took this pic.  At least I have the picture of them. 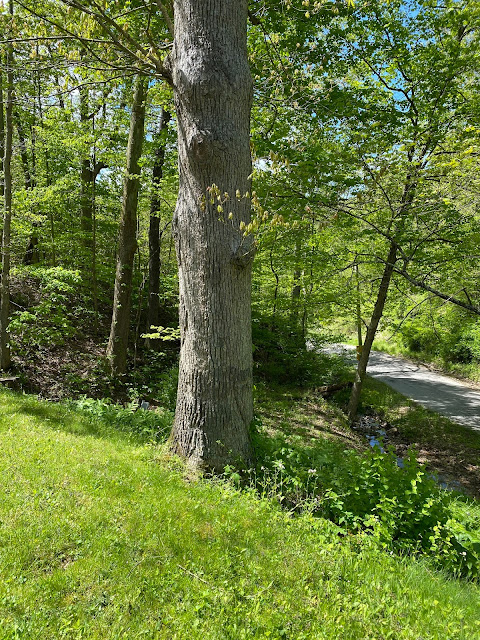 Now, this tree may not look like much to anyone else, but to me it is the fireplace in the imaginary cabin on the frontier where I played as a child.  Lots of fond memories there. Glad the tree is still standing. 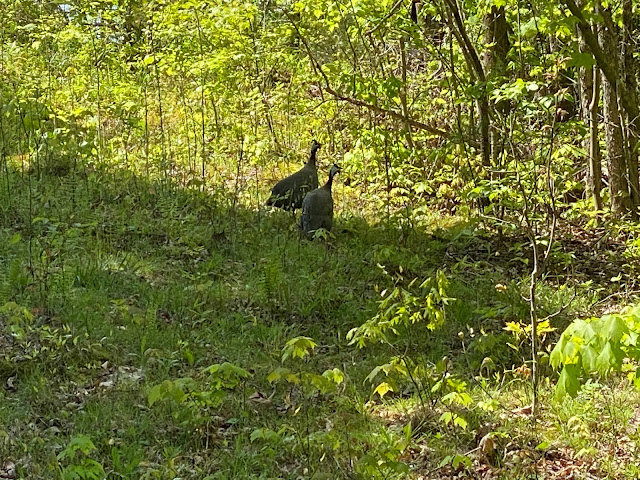 These guinea hens are from the farm next door.  They pay a daily visit to my sister's yard and like to stay around her hostas and azaleas.  I tried to get a close-up pic but they wanted to run away. 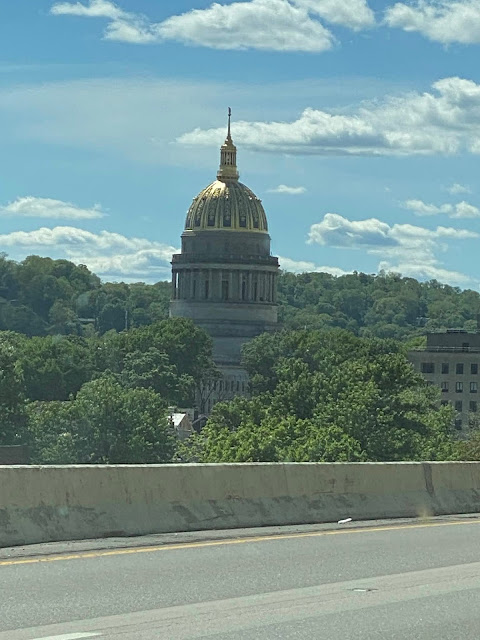 I must say that after not traveling to WV for over a year, it was exciting to drive up I-77 and see the golden dome of the capitol once more!  It was wonderful to see my family once more and to connect, visit and help.  And, it was also wonderful to have baby snuggles, good food and revisit places that I know so well from my growing up years.  After a difficult year with concern over the virus and waiting for my vaccinations so I could travel, it was fortuitous that my trip was stretched two weeks. The extra time allowed for more family visiting and for time to revisit parts of my hometown I had not been to in a very long time. This was a bit of a nostalgic trip in many ways. Asheville is now my home and I was happy to get back to our home with The Mr. But, there is always something about visiting "what you first knew" as Sarah, from the book, "Sarah, Plain and Tall" might say. What we first knew stays with us forever in memory and always has a place in our hearts.
Until Next Time,
Debbie
Posted by Debbie Styles Life at 7:06 PM

Email ThisBlogThis!Share to TwitterShare to FacebookShare to Pinterest
Labels: Travel

That was lovely. Thank you for sharing.
Linda

Your post is just what I needed this morning! It took me away as I was reading just like a good book does. I really enjoyed seeing pictures of your hometown and hearing your memories of each place. Thanks for the virtual trip to WV!

This was a wonderful visit with you to your hometown. What a blessing that you got to spend extra time with your family! I was so interested in each photo, and you did a great job taking us on the walking tour with you! I enjoyed every word! That sight of the capitol dome in Charleston is so familiar as I pass it every time I go to visit my grandson in NC, and then traveling back up to Ohio. Such a wonderful post!

Thank you, Linda. And thank you so much for reading!

You are so welcome, Sharon. I'm glad the post took your mind to other places for a bit!

Thanks so much, Karen! It's always exciting to see familiar sites when one has been away for awhile. Take good care.

I enjoyed visiting your hometown, Debbie. Aren't visiting our memories wonderful? Thank you for guiding me on your hometown visit.

What a nice way to job memories - I'm glad you got to spend more time with family and visiting favorite places in your home town. Your town looks much like my hometown.
Grace & Peace, Iris
www.IrisOriginalsRamblings.com

Thanks Kathy! So glad you enjoyed. The baby is Emily's little boy. Remember my telling stories about her when she was little?!

Thanks, Iris. I think many hometowns probably have a lot in common!

How wonderful that the gas shortage turned into such a wonderful experience of “going back home”to the place of all those special memories. Enjoyed the virtual visit and learning about your past.

I love a dive back into nostalgia and your photos are just lovely. Thanks for sharing them. xx