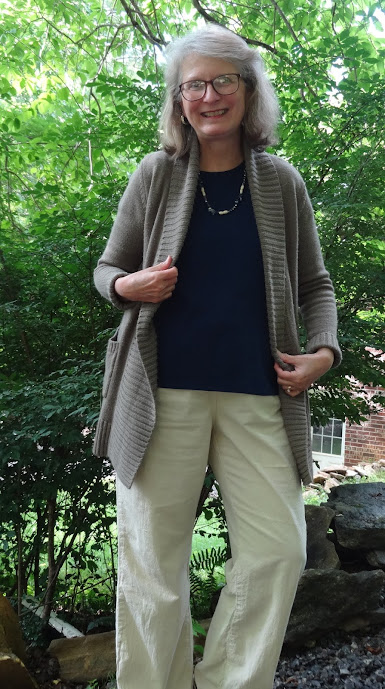 Hello everyone!  I love tops that are comfortable to wear, easy to wear and can be worn with various pairs of pants, jeans and skirts. I'm talking about what I call "staple" tops that I can throw on without lots of thought about styling them because I know they will just "work" with anything I'm wearing. 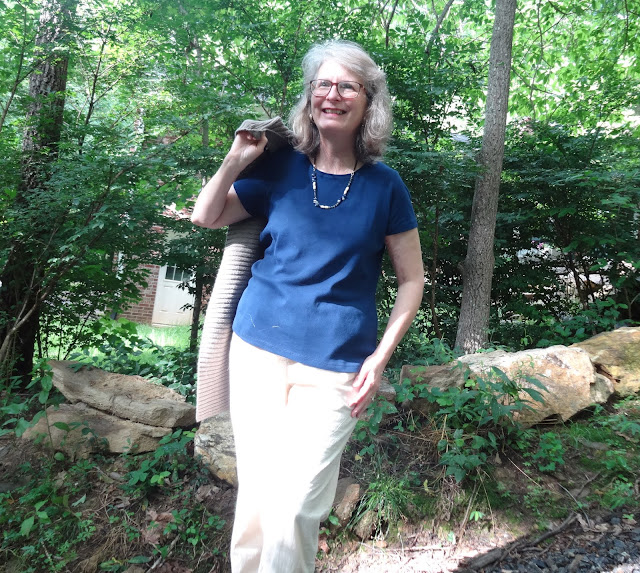 I might also add that great staple tops, in my opinion, come in solid colors so they can be worn with either solid or print pants and skirts. To be honest, I haven't been able to find many tops like these for a long time. Really since I retired. I had a few of these type tops years ago but wore them out, outgrew them, etc. So I've been in the market for some of these tops and, yesterday, I hit the jackpot!! 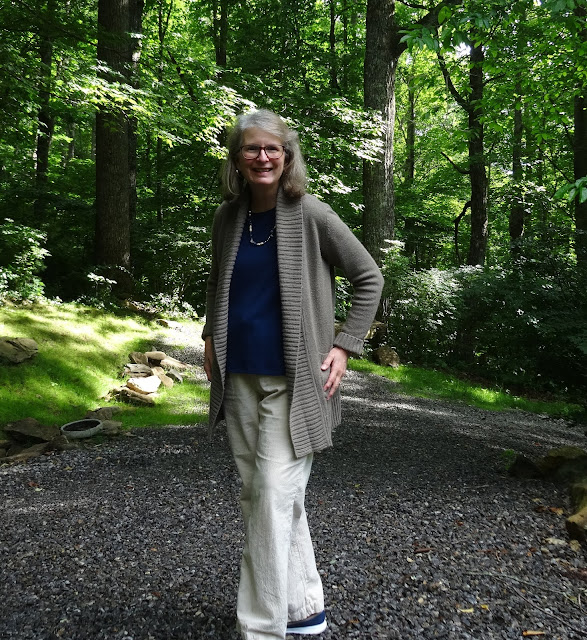 I finally found the type of tops I wanted at J.C. Penney! The brand is St. John's Bay and you better believe I scooped them up in several colors while I could get them! I'm wearing navy blue in these photos which pairs well with my khaki pants, tan waterfall sweater and my Skecher tan/blue shoes. I absolutely love navy blue with brown and I am thrilled to have this top in this color! 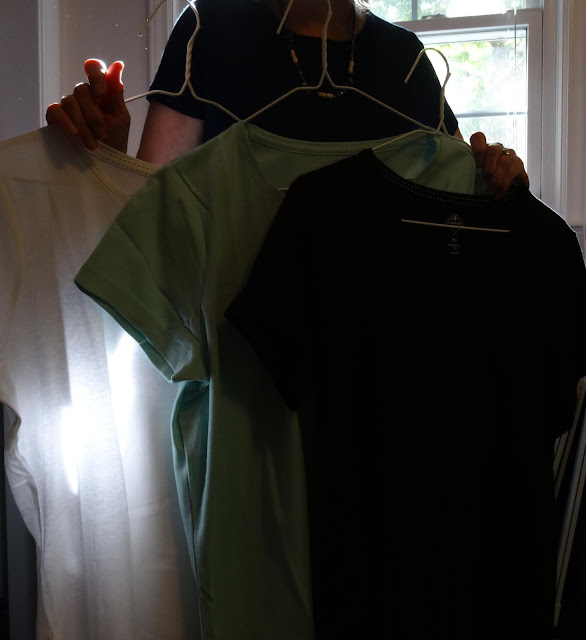 Sorry that the photo quality on this pic isn't great but I wanted to share the different colors I purchased. I was able to find black, white and the mint green in my size as well as the navy blue. The material is a very soft cotton with a round neck which is what I wanted. The shirts are called St. John's Bay Essential Tees and were on sale which was also awesome! 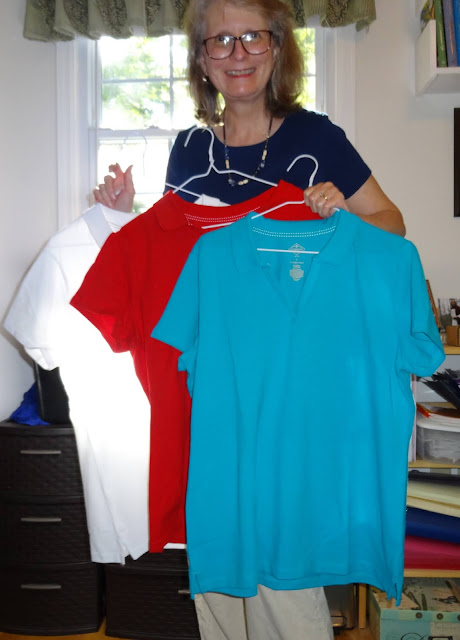 I was also able to find the classic polo style in the same brand AND on sale so I picked up red, white and blue in that style as well. The sizes were a bit picked over but I managed to find colors in both styles that I will wear over and over again. Perhaps I haven't been looking in the right places for these classic styles but I just haven't been able to find these styles in recent years. It seems like tees have been all about "graphic tees" with sayings on them and while that can be cute sometimes, I don't want that kind of tee all the time. I like solids in classic stylings that I know I can dress up or down with a necklace or a sweater or jacket to fit wherever I'm going. 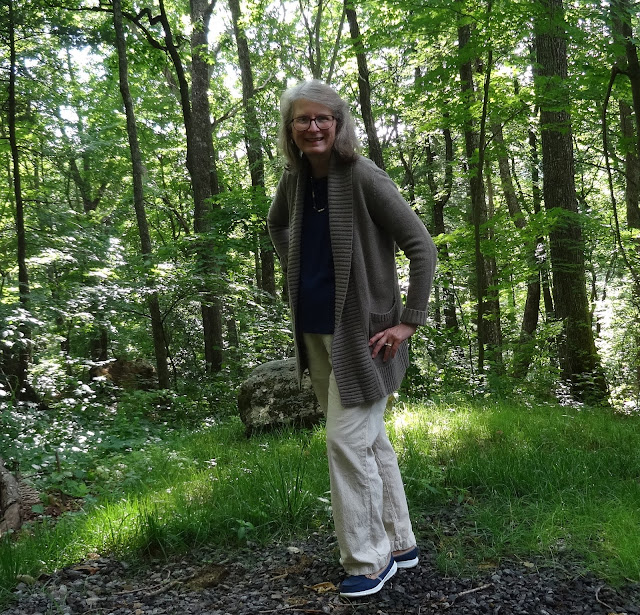 This was my outfit for our outdoor church service this morning and I felt very comfortable in this classic styling. I did size up in these tops as they are cotton and I expect some shrinking to occur with repeated washing and drying. So, keep that in mind if you are ordering online. I also purchased these in the petite department but you can order them online in regular.
Are you a lover of classic styling in tops and tees? Do you like polo style shirts? Be sure to let me know in the comments. I get concerned that stores like J.C. Penney may eventually close. So many stores have closed already and I feel that certain styles are getting harder to find. Yesterday, when The Mr. and I were walking around it kind of felt like the twilight zone because very few people were in the store. While that was nice for us not to feel like we were in a crowd, it certainly can't be good for business.  Sigh.  Guess I'm becoming a classic myself (or an antique!!)
Until Next Time,
Debbie
Posted by Debbie Styles Life at 7:07 PM 6 comments: 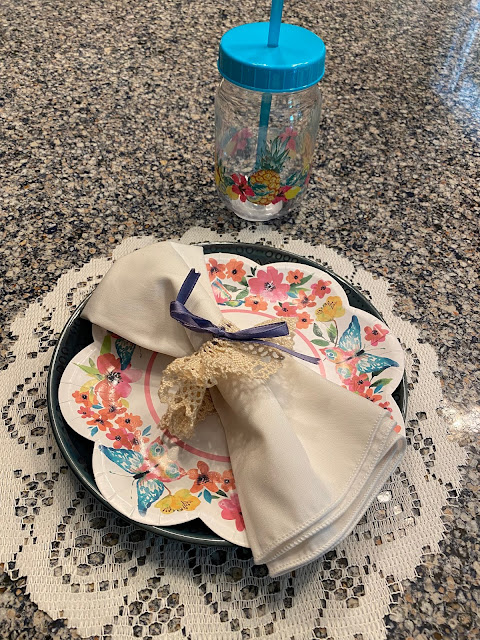 Hi everyone! Today I'm sharing four fun ideas for using paper plates from Dollar Tree. I just love how pretty these scalloped edged paper plates are with the lovely flowers and butterflies on them. I thought these plates would look just lovely on top of my blue stoneware plates. I placed the stoneware on top of placemats that are doilies (also from Dollar Tree) and then added a cloth napkin with a lace napkin holder. A pretty drink goblet with a straw tops it all off. Who says that we can't mix paper and plastic with stoneware, cloth napkins and lace? I think it all combines to make a lovely tablescape. 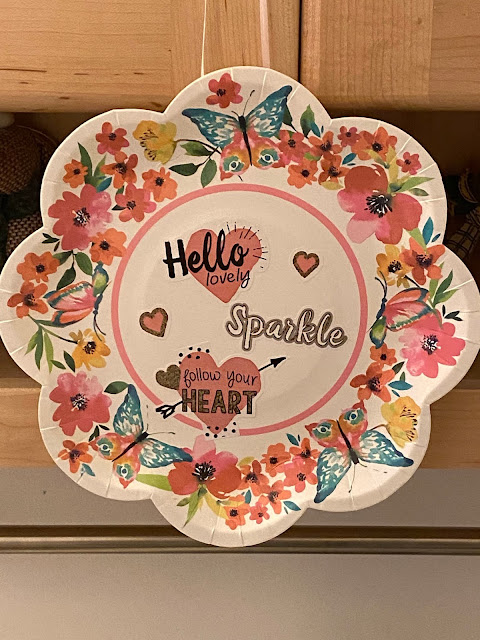 Next up is a simple hanging sign that I crafted from one of the plates and some sweet stickers (also from Dollar Tree) that I placed at random in the center. The result is an uplifting sign that I hung from pink ribbon in my bathroom that I can enjoy looking at and getting some lovely reminders to follow my heart and sparkle while I'm doing it! Will this sign last forever? No, and it's not meant to but, in the meantime, it's fun and creative. 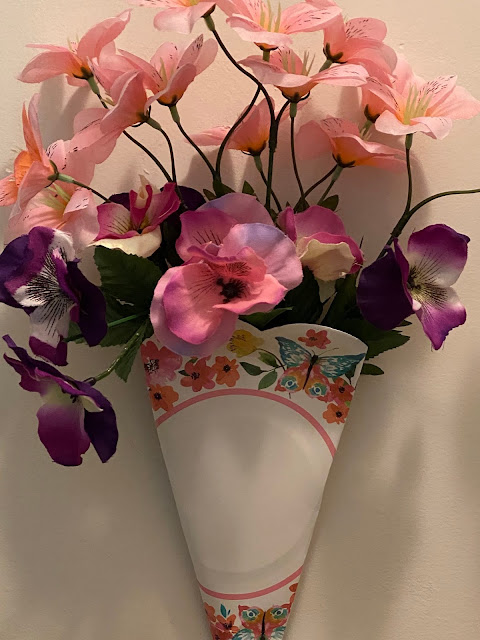 Another option is to create a flower wall hanging using one of the plates. I simply folded the plate in a sort of triangle and secured it in back with tape and then added pretty silk flowers inside and bent them to a pleasing shape. I used a twist tie on the back to create a hanger for the wall hanging and it now hangs proudly in my hallway. I can think of using different plates as the seasons change to create different seasonal wall hangings with different silk flowers. An inexpensive and versatile way to decorate! 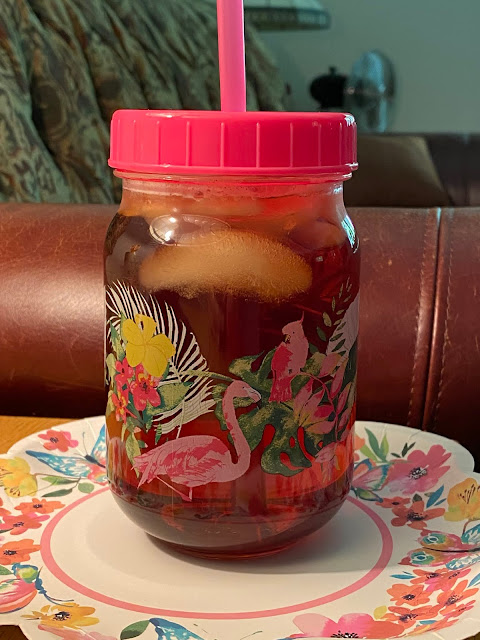 And finally another simple idea using one of the plates as a coaster topped off with another lovely plastic goblet with a straw. It's fun to drink my iced tea from a pretty summertime goblet and to have a pretty coaster to place it on as well! The plates have a coating which makes them sturdy enough to not let any moisture get through to my end table. 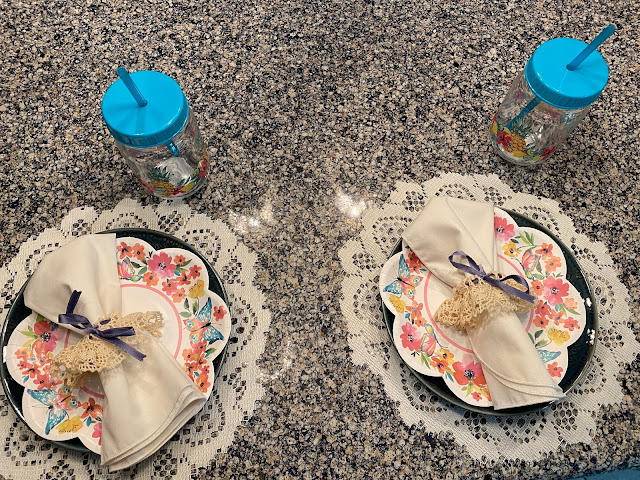 I hope you'll let me know in the comments if these ideas are helpful to you or, perhaps, you can think of even more ways to use pretty paper plates. If so, please do share your ideas too!
Until Next Time,
Debbie
*Linking with bellacraftspublishing.com
Linking with https://ducksnarow.com
Posted by Debbie Styles Life at 5:17 PM 5 comments:

Email ThisBlogThis!Share to TwitterShare to FacebookShare to Pinterest
Labels: Home Decor and Tablescapes 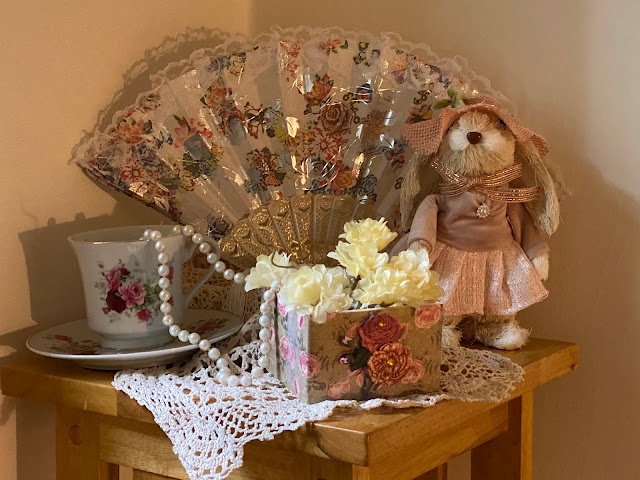 Hello everyone!  The foyer table was needing an updated style and so I decided to incorporate several items to create what I think is a romantic vignette. 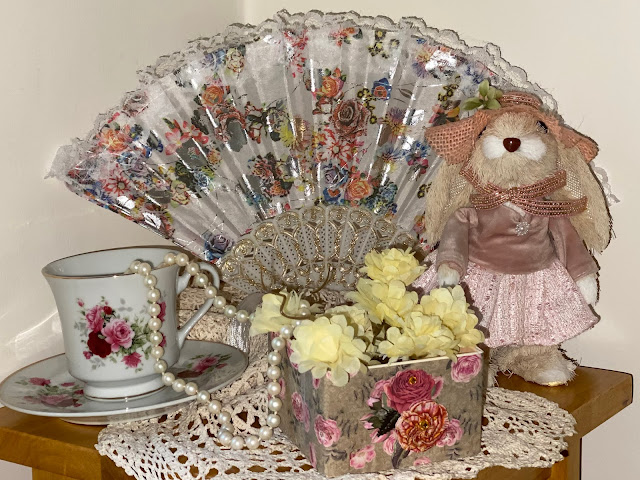 There is nothing quite as romantic or mysterious as a beatiful fan which I am using for the backdrop of this vignette. The pearls spilling out of the teacup adss a three dimensional look. The whimsical bunny is dressed in a velvet top with pearls and bows in a soft pinkish mauve color. The box is one I created using mauve flowered craft paper on the outside and then layering a three dimensional rose sticker on the outside and cream color flowers on the inside. Tucked underneath everything and spilling over the edge of the table is a cream color lace runner. While I'm calling this a romantic vignette, I think it also works as summer decor with the emphasis on pastel colors and flowers. 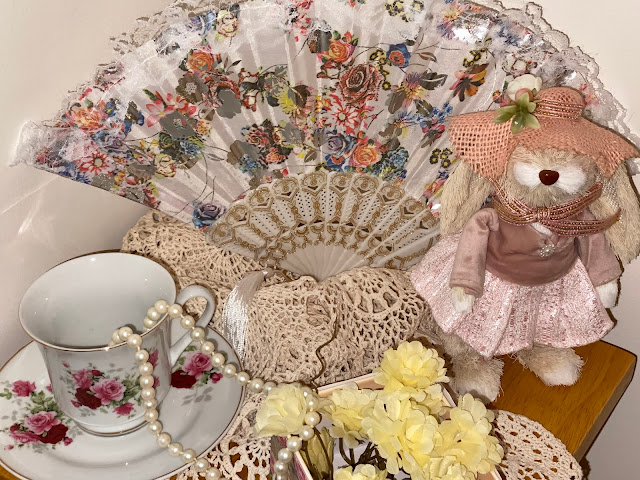 It's always so much fun to come up with a new vignette for the foyer table. I actually began thinking of this vignette with the purchase today of the bunny and some new craft paper. From there, I looked to see what other items I had on hand which might go well together and voila a new foyer table vignette! The fan was a Dollar Tree purchase from awhile ago. The pearls, flowers and lace runner I already owned. The tea cup is part of a tea set that my oldest sister recently gifted to me.
What items do you have on hand that might work for a table vignette at your house?  Be sure to let me know in the comments!
Until Next Time,
Debbie
Posted by Debbie Styles Life at 7:08 PM 8 comments:

Email ThisBlogThis!Share to TwitterShare to FacebookShare to Pinterest
Labels: Home Decor and Tablescapes

Back to Thrifting at The Goodwill 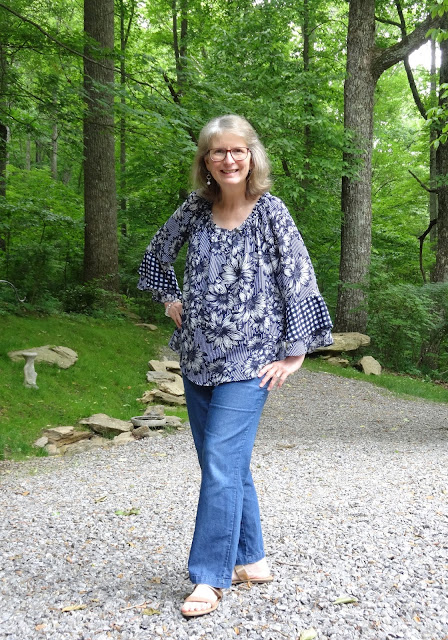 Hey Everyone!  It's been awhile since I have shared a fashion post.  I'm back to going into thrift stores and thought I would share a recent find that I think is really fun! 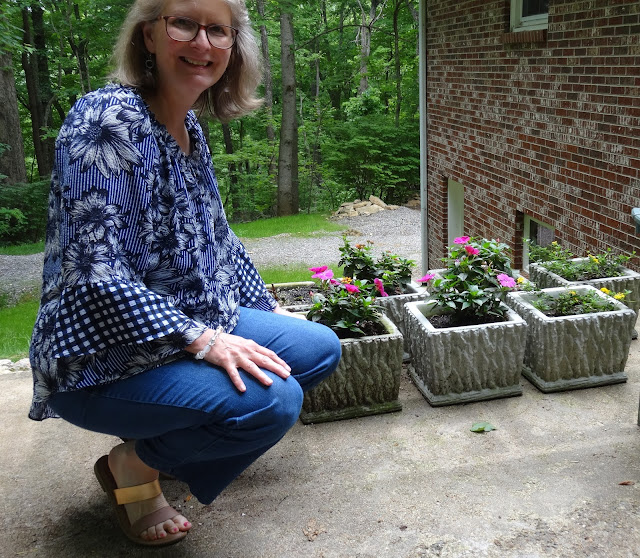 I found this very pretty blue and white top recently in Goodwill.  It has a lot going on and that is what makes it so fun IMO!!  The plaid bell sleeves paired with the stripes and flowers on the main body of the top all just blend together beautifully and give a lot of eye appeal without being overwhelming. 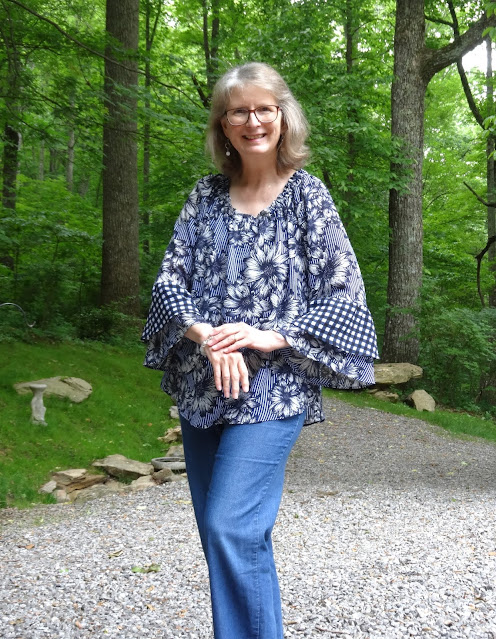 You all know that anything blue catches my eye and this top certainly is eye catching! When I first started blogging, you may recall I didn't feel drawn to prints so much as I felt that they wore me instead of my wearing them. For some reason, I am much more drawn to prints these days but they have to feel good when I wear them. This top feels really good and I love the flowiness of the shorter bell sleeves. 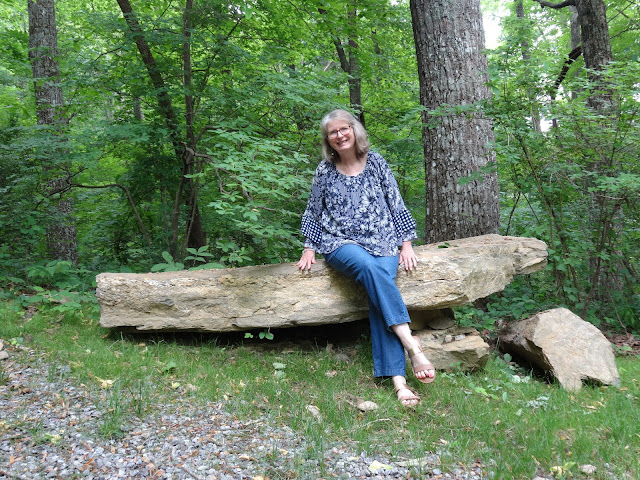 This top can be worn off the shoulder as well as regular.  I'm not really an off the shoulder type person so I'm wearing it as a normal top. The material is thin so I am wearing a navy blue cami underneath. The jeans I have owned for quite awhile and the sandals are not thrifted. I purchased them on my recent trip to West Virginia. They are a perfect summer sandal slip-on from Walmart. 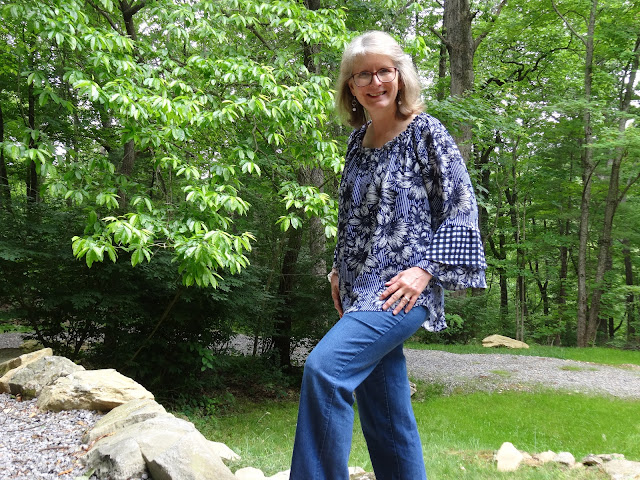 It feels really good to be getting back to my old thrifting ways!  While I have done some thrifting over the past year using online sites, because of having to pay for shipping the bargains just aren't as good as you can get at Goodwill or other thrift shops. I found a new thrift shop recently that I will share with you in another post and it has great finds. I love finding a good bargain and thrifting is also a great way to practice recycling! Plus, I only buy what I really like and want to use. Most of my favorite clothes I wear were thrifted and that's OK by me!
Have you thrifted any clothing recently?  Have a fun top you love to wear?  Been shopping your closet?  Hope you will leave a comment and let me know.  I love hearing from you!
Until Next Time,
Debbie
Posted by Debbie Styles Life at 12:26 PM 11 comments: