Snow Days Are For Eating

Hi friends: I've been doing a whole lot of messing around today, rearranging my flowers for the umpteenth time this morning. This is the latest iteration of the arrangement since I started back around my birthday. I keep feeling like I'm getting new flowers each time I toss the dead stems and come up with a new look.
Speaking of "messing around," that's what I've been doing a whole lot of today. It's supposedly a "snow day" today and many of the schools were either closed or on two-hour delays this morning. There hasn't been much snow at all. Just flurries or snow showers off and on. As you can see, there's nothing on the ground at our house.
I had already decided that today was going to be a stay-at-home day, so I have "looked" for things to do all day. Let's see, I made breakfast and then lunch for The Mr. and myself. Today's menu for lunch featured homemade vegetable soup with couscous added in the bowl. Days like today make me want to "munch" and I have been munching on carrot sticks, honey-oat bars and cookies. (Sigh) Yes, cookies...oh well. Two out of three isn't bad!
Why do snow days feel so different from regular days? I think of when I was a little kid and we actually had snow days off from school. Now, there are only possible delays and "virtual school" days, more's the pity. I feel sorry for kids today who don't have the pleasure of a true "snow day." Waking up to see snow on the ground, waiting by the radio (no television closings in those days) to see if your school district was closed and then hearing those magic words...."Wood County Schools are closed, " oh that was sweet to the ears!!
I was never the type of kid who wanted to play in the snow much. I might put on my coat, hat and gloves and walk around outside a little but I wasn't into building snowmen and such. I really didn't have anyone around my age to build a snowman with or throw snowballs at. But, I still looked forward to having snow days off from school. On those days I could spend time reading, watching favorite television shows, sleeping late and, yes, munching on my favorite snacks. Guess old habits die hard, right?!
Of course, not all snowfalls back then resulted in a snow-day off from school. I can well remember pretty heavy snowfall in which the schools stayed open and the bus drivers would put chains on the bus tires. I can still recall the sounds of the tires with those heavy chains ka-lugging through the snow and pulling up to the bus stop. It would be freezing outside and, sometimes, inside the bus. It was always wonderful to finally pull up to the school and exit the bus moving into the warmth of the classroom. Sometimes, you could smell lunch cooking from the cafeteria and the delicious smells of hot rolls, mashed potatoes and meat gravy would waft down the hallways. There was a feeling of being safe and sound, snug in the surroundings, that I think I still wish for on days like today.
As I have been composing this post, the snow has increased, blowing strongly against the window panes. The flakes are bigger and the fog has descended into the valley. It's looking as if the snow may decide to lay-on after all.
Maybe, if that happens, there would be another snow-day tomorrow! A day for staying warm and cozy, munching on good foods, reading interesting books and day dreaming of snow days gone by!
********************************************************
Speaking of books, here's a peak at what I have been reading. 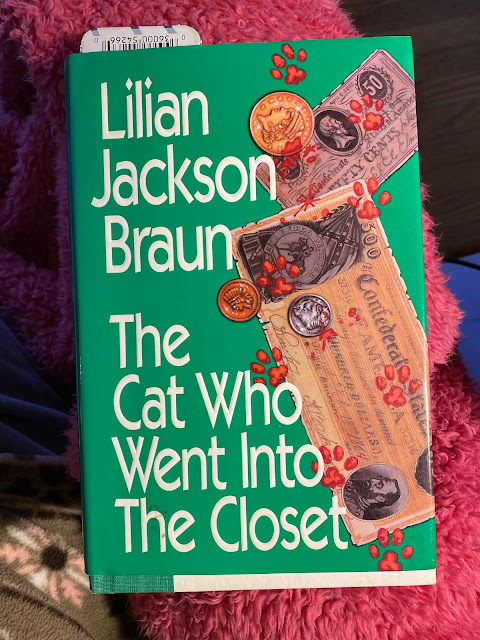 I'm delving back into the "Cat Who" series by Lillian Jackson Braun. I find her books so entertaining and cozy. Just the perfect type of book to curl up with on a snow day. The antics of Koko and Yum Yum, the two Siamese cats who live with Jim Qwilleran and help him solve mysteries, are the perfect combination of cuteness and cat intelligence. 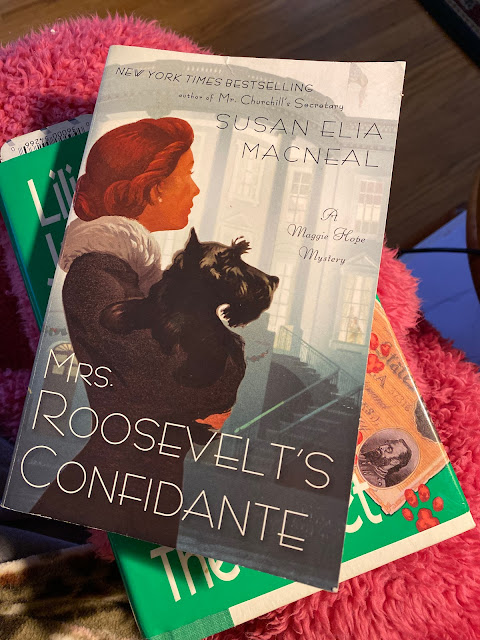 I'm also giving Susan MacNeal another try with this book in the Maggie Hope series. This time, Maggie is traveling to Washington, DC soon after Pearl Harbor was attacked and is helping Eleanor Roosevelt out while also acting as Winston Churchill's typist. These books remind me of the Maisie Dobbs series by Jacqueline Winspear. However, I haven't been able to get into this series as much as I did the Maisie Dobbs series. I find that too many WWII books are not good for me to read. While the books are interesting historical fiction accounts, the subject matter can still be a bit traumatic. That's why the Cat Who series is lovely to sandwich in-between readings of these other heavier tales.
Hope you are staying warm and dry, friends!  How do you handle cozy snow days?
Until Next Time,
Debbie
Posted by Debbie Styles Life at 3:51 PM

Email ThisBlogThis!Share to TwitterShare to FacebookShare to Pinterest
Labels: Things I'm Delighted to Share, This and That Topics

Your Post today about a Snow Day brought back many memories.
My father was a truck driver and away most of the week.
My mother was a school bus driver.
When we had snow and it seems like we had more snow back in the 50s and 60s,
my mother and I would go for a short ride on a snowy morning
to check the roads.
If she felt it was needed, she would put chains on the bus tires.
Let me tell you that was no easy job.
I stood nearby holding a flashlight and giving moral support.
Sometimes it started to snow and blow and drift snow, while I was in school.
I would look out the windows and worry
about how my mother was going to make it to and from school.
My mother was a very good school bus driver
and always greeted her students with a smile.

I wasn't big on outdoor snow activities either,
but I do remember the tin Lizzie that my neighbors and I
used on the big hill in the field between our farms.
When snowed in for days as a child,
I would beg for our family to play Monopoly.

You mentioned meat gravy and mashed potatoes.
One of my favorite cafeteria menus was hamburger gravy on mashed potatoes. Lunch at school brings up another memory.
I went to a four room two story school for my first 4 and 1/2 years.
It had two classes in each room. It was in the small town of Mt. Aetna. Sometimes my mother didn't pack lunch for me.
Instead, she gave me money to go the the bar up the street from my school. My neighbors, John and Jim, and I would to the bar
and buy hamburgers for lunch.
Then we'd walk to the nearby candy store for a sweet treat.

There was a "feeling of being safe and sound, snug in my surroundings."
I was blessed and it sounds like you were blessed as well.
I was blessed to have wonderful parents, with family and friends nearby.
Thank you for reawakening these memories this January morning.
Linda Ziegler

Your post is so descriptive of your current snow days as well as those you remember from your childhood! Just like you, my idea of snow days includes a good book and some winter comfort food like soup or chili. My snow days now often include some time sewing or quilting while watching the snow fall outside the window in front of my sewing machine.

Hi Linda: I'm so glad my post brought back such wonderful memories for you! I can't imagine being a school bus driver. Your Mom was a brave, brave woman! And to put chains on her bus by herself! I can't imagine doing something like that. Food evokes such memories, doesn't it? Like the hamburger gravy and hamburgers at the bar that you remember. Yes, I was blessed in many ways as a child and you have reminded me of that this morning. Thank you. Have a wonderful weekend ahead!

Hi Sharon: Yes, comfort food on snow days is a must. Today, I woke up and we have lots more snow. Our road is covered and it is still snowing. So, I will enjoy yet another "snow day" and enjoy my book and looking out the window at my snow globe world! Hope you have a good day too!

Oh goodness, I don't have memories of childhood snow days. I'm sure we must have had some, but Alabama just doesn't get that kind of snow. Now when we lived in Missouri - my kids got a good many of them. Lots more snow there.

And, oh how I love Lillian Jackson Braun books. I actually have them all and have read them several times. I'm back into them again.

I have trouble finding books that I haven't read that I want to read or that I'll tolerate what's inside them plus I'm cheap. I used to frequent our local library, but haven't been to a library since before the plague.

Hi Iris:
Thanks for stopping by! I love the Jackson Braun books and am currently re-reading a lot of them. I tend to go back to the books that leave me feeling warm and cozy and these books fit the bill. I have favorites that I return to time and again. I'm always on the lookout for new books to love and return to over and over! Have a great week!