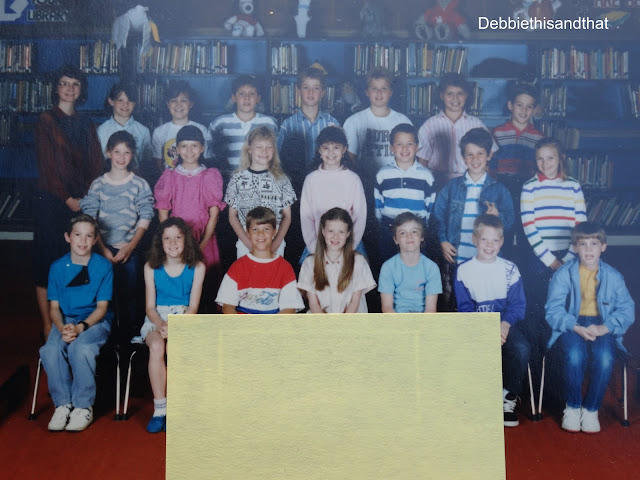 Happy Friday, dear readers!  Remember a couple posts ago when I was talking about going through a major transition, but didn't tell you what it was?  Well, today I'm going to do the big reveal. And, for me, this is a BIG announcement...

Yep, it's true. I can hardly believe I'm saying it.  But, the more I keep saying it, the more believable it is becoming. I signed the "official" paperwork earlier this week and I plan to finish out this semester at school. When we leave for the December holiday break, I won't be returning to school in January. I'm excited, happy, emotional and, yes, a little bit sad....even though I am seeking this change and am very ready for it. But, it is still a BIG transition. And....I have to ask myself.....where did 30 years go?  In some ways it seems like forever since I stood in front of the roomful of children you see in the class picture above. (Who is that young woman standing in the far left corner? Wow...a much younger Debbie, that's who!!) But, in other ways, it seems like I just blinked and those 30 years went by. The year was 1987 and Madonna was at the height of her fame as was Janet Jackson. "Three Men and A Baby" was a huge hit at the box office and we first heard the phrase, "Nobody puts Baby in a corner," spoken as only Patrick Swayze could say it. The school I was hired to teach in had just installed a "new wave" computer lab of Apple IIe computers that only the computer lab attendant could touch if the children had a question about using them. The teachers were only supposed to supervise the kids while they used the computers! To put how far we've come with technology into perspective for any younger readers....the Apple IIe computers used floppy disks. Remember those?! I have to chuckle at this memory as I compare it to today's teaching world in which all teachers are supposed to be "tech savvy" and most schools put computers into children's hands as soon as they arrive in kindergarten. Hey, I see babies using computers in restaurants now days. But, back in 1987...it was a different world.

I arrived as a teacher in the public schools actually six years after I graduated from college. I have mentioned in earlier posts, that my first degree was in music education K-12. But teaching jobs in the field of music were few and far between in the early 80's, so for six years after graduation I taught private music lessons, did a short stint in the Records and Admissions Office of my college and taught four year old pre-school. During this time, I had also married and moved to North Carolina and decided I wanted to go back to school to get my elementary certification. So, back to college I went, this time as an "older" student. It was a challenging couple of years in which I wondered if I was doing the right thing or not. After all, I had already gotten one teaching degree in which I was unemployed. What if it happened again? And, to top it off, my husband had also decided to change careers and go back to school to be a teacher. Yikes.....I knew I had to get a job and soon! But, things worked out as God had planned..... and I did get a job.

But, it wasn't an easy first year. Oh no!!!  I still call that first year of teaching my "trial by fire" year in which I was hired to teach a "combination" class. That means a class that contains two grade levels; in my case third and fourth grades. So, here I was a brand new teacher and I was supposed to teach subject matter from two different grade levels. AND....the class was formed two weeks after school had already started due to overcrowding in the regular classrooms. So these students were removed from their original classrooms and put into a classroom with me. Yes....you can imagine how the kids felt....and their parents.....and I was a nervous new teacher.

But, by golly, we all made it through. And here I am thirty years later....announcing my retirement. There have been many classrooms of students these thirty years. Lots of fun and laughter and learning....lots of good memories. 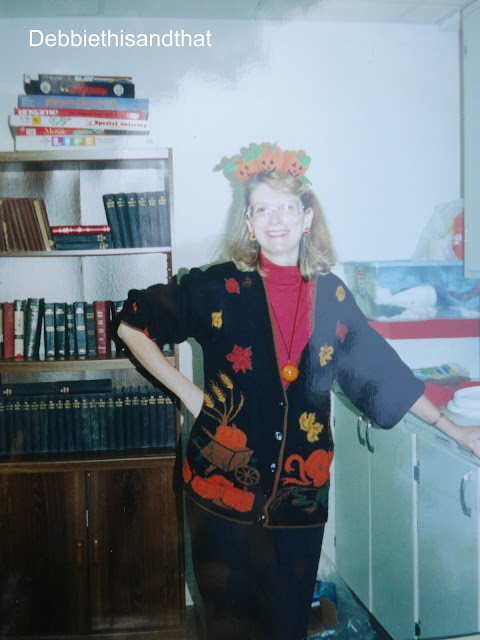 We used to dress up at Halloween....we don't do that anymore. 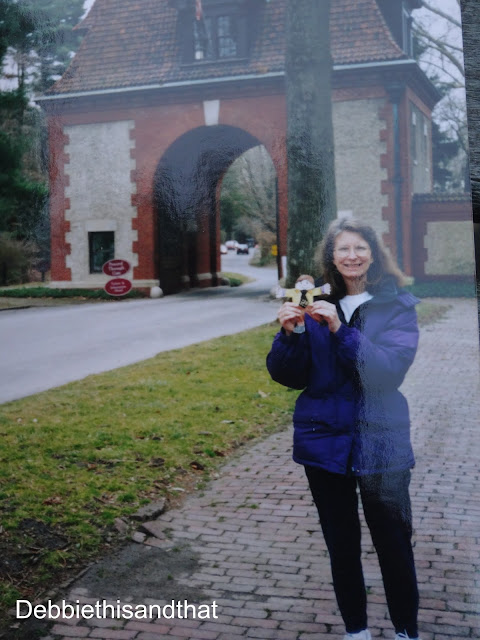 And here I am taking "Flat Stanley" on a trip to the Biltmore House. Have you heard of Flat Stanley? He is a character in a children's book who gets flattened when a bulletin board falls on him. He gets to go on lots of adventures because he is flat. Lots of teachers, like me, would either take Flat Stanley places and photograph him or send him through the mail to different places where people would photograph him having "adventures" and then mail the pictures back to our classroom. The kids LOVED it! They couldn't wait to see where Flat Stanley had been. 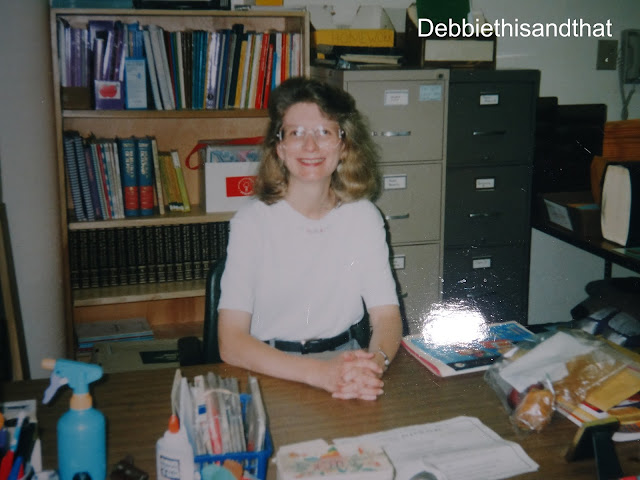 And there were more transitions over the years. Like transferring to new schools to teach. And then, going back to school for a Master's Degree. And working on National Board Certification. And then going back to college, one more time, to earn my Gifted Education Certification. For thirty years I have either been in school or going to school.....at the same time! 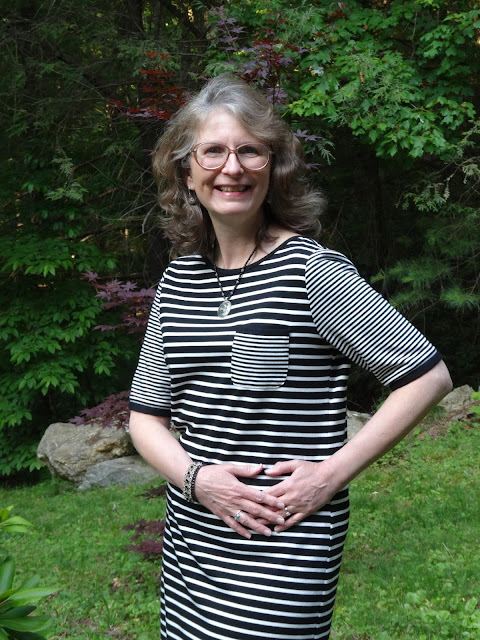 And here I am today....a little older.....with a few more wrinkles and gray hairs.....feeling so grateful for the chance to have been a teacher.  But....I'm ready for new adventures. I'm ready for a different schedule. I'm ready to be able to enjoy my home and family more. I'm ready for more time to pursue interests and hobbies and blogging and writing.

But, I'll never stop being a teacher!

Email ThisBlogThis!Share to TwitterShare to FacebookShare to Pinterest
Labels: Educational Topics, Things I'm Delighted to Share, This and That Topics

Oh my!! Congratulations Debbie, you are SO lucky to be retiring!! I can't wait to announce that myself...even have a "countdown" on my desktop at work. Alas, a few years to go... You must be so excited! And to be young as you are, you can really enjoy the adventures to come! What an exciting time in your life!!

I do feel lucky to be able to retire, Karen. I am excited and at the same time disbelieving that it is really happening! That's a great idea to have a "countdown" on your desk. I've been thinking about and planning for this for several years and now, looking back, the time has moved fairly quickly. I always tried to enjoy life all along the way, though, and will continue to do so these last few months at work. Hope you have a great weekend!

Congratulations Debbie! I'm sure there are many wonderful things to come for you! This is just the beginning of something new and great.

Congrats, Debbie, you're entering a wonderful new phase. We started our business when my husband retired -- there's a learning curve when shifting from academics to entrepreneurs. Just know that anything's possible.

Thank you, Julie! I'm looking forward to those new things!

Thank you, Ann Marie: I'm looking forward to that new phase in life.

Hi Debbie, and congratulations... You mentioned on my blog that we shared a lot of similar likes and it is so true.,... even in our chosen vocation... I retired from teaching after 30 years in 2003... wow 13 years ago.... at 66 I can hardly believe that I ever taught third and fourth grade....whereever did the energy go... whew! But you are right.. once a teacher, always a teacher... now I lead small groups in Bible Study and love it because it just comes naturally. I read on your profile you also love tea... I am always planning tea parties... and collect tea paraphenalia.. in fact it's time to slow down on the collecting.. one only has so much storage available! But I understand your feelings both joyful and sad.. but you are going to love retirement.. YOUr time will be so full you finally will learn how to say 'no". It has taken me all of 13 years to say it... but after working I felt I had missed so much being with other women in Studies and volunteering... God bless you in this last semester... enjoy each day and I look forward to following along through your blog to see how you blossom in retirement!

Thank you so much, Schotzy, for your kind wishes! I appreciate your encouragement and look forward to reading your blog, also!

Debbie what a sweet post this is. Congratulations on your retirement. I know that it is a bittersweet time but I have news for you since you are a blogger an old door may close but new ones are opening up every day. Enjoy your retirement, relax and then when you have relaxed a bit, you can jump into blogland and really have fun. Thank you for the sweet inspiration you have given us. Oh and I like the 80s sweater you are wearing in the first picture.

I've always considered teaching the most honorable profession, and sometimes regret not having become a teacher myself. I am still so grateful, after all these years, to certain teachers I had in elementary school through college. I'm sure your students will always have fond memories of you too! Congrats on your honorable career! --Ginger

Thank you, Mary. It is bittersweet, but I know you are right....new doors will be opening. I'm looking forward to that! Yes, I loved that 80's sweater...wore it a lot!!

Thank you, Ginger, for those sweet comments. I do think of teaching as "honorable." I hope my students will have fond memories of me. You mentioned regretting not being a teacher, but you actually teach all of us many things through your blog. I always enjoy learning what you have to say. Take care. 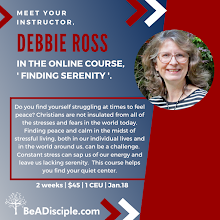