This and That.....About Cats Part III

Well, we've reached the final post in my series about the cats in my life. So far, I have introduced you to the Tuxedo Cat sister act of Gracie and Groucho and the feisty but adorable Annie. Today, I want to tell you about the Master Cat, the cat who is the very antithesis of what a cat should be....Morris. To say that we hold Morris in high esteem is an exaggeration. We were blessed to have her with us for 18 1/2 years, so the tales about her are many! She even had a magazine article written about her! How did such a special feline come to own us?

It all began in the early 1980's back in West Virginia. A couple at my church mentioned that they had found a grey Tabby cat living in an alley close to their house. They brought the cat home but found it didn't get along with their dog. I was fresh out of college at the time and still living at home with my mom and older sister who were not in favor of my getting a cat. It's hard to believe now that I could be so impetuous, but on a whim one day,  I made the decision to go get the stray without telling my family. Imagine their surprise when they came home from work that day! Not one to stand on ceremony, Morris immediately began to make her presence known in the house by swinging on my sister's clothes hanging on the door of her bedroom and my mother's drapes in the living room. She also stuck her head in the squirrel pot my mother had soaking on the counter (don't even ask!) And this was only the first day I had her! Every day thereafter became an adventure of Morris streaking through the house, getting into things she shouldn't get into, getting in trouble and then racing down the hall to the utility room where she proceeded to jump from the floor straight up into the attic opening whereupon she would peer down at me as if to say, "Thought you were gonna catch me, didn't ya?!"

I never knew Morris' official age when I brought her home, but I estimate that she was less than a year because she went into her first "heat" about a week after I got her. The horrific yowling and howling kept us all awake at night and it wasn't long before we were making a trip to the vet to get her spayed. In spite of her wild antics, though, my family got attached to her and when I married Mr.thisandthat a year later, my sister and mom were sorry to see her go.

We moved the day after we got married, and Morris traveled to our new home in a cardboard box, sleeping peacefully most of the way. Mr.thisandthat had grown quite attached to Morris during our courtship and to this day he tells me he married me for the cat! We lived in a number of different homes the first couple of years and Morris always managed to somehow get into the inner workings of the houses. We would come home to find dirty little paw prints all over the floor where she had tracked dirt after crawling through the substructure of the house. She also developed some curious habits such as playing the piano at night by walking up and down the keyboard and sleeping on top of the aquarium so she could dip her paw into the fish tank. She loved cantaloupe and would sneak into the kitchen to eat the cantaloupe rind if one was left on the counter. And once, she opened a box of donuts and licked the frosting off the tops of all the donuts!

Being that she was an only cat for the first few years of our marriage, Morris was used to getting all the attention, so she was very dismayed when one day she walked into the living room and spied something strange on the living room floor. She stopped in her tracks and circled the rug slowly as she tried to figure out what this strange phenomenon was. It was small, furry, salt and pepper colored and whimpered. Her nose wrinkled as she smelled this furry intruder and realized the awful truth....we had brought a dog home! Thus began the uneasy relationship between Morris and her dog brother, Max the schnauzer. Max tried his best during the next thirteen years to rule the roost, but Morris always had the upper paw and would regularly discipline Max with a good swat if he dared to bother her too much!

The years passed by so quickly with Morris continuing to do her acrobatic antics of leaping on top of doors, chasing me down the hallway grabbing me by the ankles and refusing to drink water from any other source except an aquarium that contained water (but no fish) for her use only. She was stubborn and willful and definitely had ways of letting me know how she felt about things. But, she could also read me like a book and whenever I was feeling down, she would make sure to curl up in my lap and comfort me as only a loving cat can. The day that I learned my mother had died, I came home from work and there was Morris waiting at the door for me. She knew.

I won't belabor the illness that finally took Morris from us, but we'll just say that the last three years of her life were difficult. But through it all she never lost the tenacious quality she always had for life and would rally back from each setback time and time again. But the sad day did come when she just couldn't fight anymore. I held her in my arms that day and rocked her like a baby.

I mentioned earlier that Morris had a magazine article written about her. A few years ago, a local magazine for women published the story of Morris' life in their annual "A Woman's Best Friend" series. I was pleased to be able to write the article that showcased Morris for what she was...a really great cat....and my good furry friend. Somewhere in heaven, there is a cat who is eating her fill of cantaloupe and chocolate donuts! 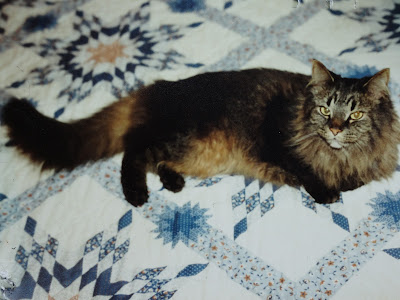 So, that's it for the cats in my life! I'll be focusing on a new topic in my next post. Until then.....may all the cats in your life be warm and cuddly...and leave your chocolate donuts alone!
Posted by Debbie Styles Life at 11:10 PM

Email ThisBlogThis!Share to TwitterShare to FacebookShare to Pinterest
Labels: Pets and Animals