Hello everyone! I'm excited to continue sharing this and that with you about cats! In my last post, I introduced our current felines, Gracie and Annie to you. Today and tomorrow, I will focus on two wonderful kitties who, unfortunately, are no longer with us: Groucho and Morris. Both of these ladies have amazing stories that will go down in fur history! For today, let's talk about Groucho.

As I mentioned earlier, Groucho was the sister act partner of Gracie. Both girls came to us as 14 week old kittens who were teeny tiny. When we first brought them home, they spent their first few days living in a shoe box. That's how little they were! While Gracie was the feisty acting "older sister" who would pace through the house determinedly looking for her sister, Groucho was the more demure girl, quiet and unassuming. She had the same black and white tuxedo cat markings as Gracie with one important distinction. She had half a moustache! You can see in the picture below the comparison to Groucho Marx...we couldn't resist giving her the name Groucho! 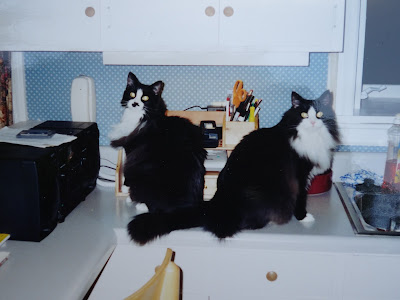 In their early days, both girls were pretty much the same size, but as time went on, Groucho gained a lot of weight. She never appeared to eat more than Gracie, but her body size was definitely on the chubby side! Both Groucho and Gracie had the habit of hanging off counters, stairs and couches. They would literally suspend half their bodies in space with one paw hanging down. This habit seems to be totally unique to them as I have never seen other cats do this. Perhaps they learned to do acrobatics while they were in foster care in a pet shop before we adopted them! At any rate, they were fun loving and full of life and the first couple of Christmases we had them, I probably had to redecorate the Christmas tree a half dozen times because they kept undecorating it at night! In addition to her moustache, Groucho's other distinguishing characteristic was her purr. She had a purr that sounded like an engine running. It sounded like it was vibrating all the way from her belly to her head. We always knew when she was happy and content because there was no mistaking that purr box! It did take awhile for Groucho and Gracie to warm up to us, though. We had been used to a former cat who had lavished love on us and was the very definition of a lap cat. Not so for these girls, especially for Groucho. I estimate that it was a good four years before they truly let us pet them and hold them. That was a long time to wait for cat loving people like us! But those years did pass and eventually both girls developed into lap cats.

With a name like Groucho, you might think her demeanor would have been....well...Grouchie. Not true. Although we lovingly referred to her as "The Grouch" she was actually very kind hearted, especially to other animals like her dog brother, Max. He was a miniature schnauzer who was already with us when we adopted Groucho and Gracie. I will devote a post to Max at another time, but suffice it to say, he was quite the dog!! He became pretty ill when the girls were about three years old and Groucho distinguished herself as his nurse. Many nights I would get up to check on him and find Groucho laying beside him on his dog bed. When he became incontinent and we had to put his bed in the basement, Groucho would stick closely beside him keeping him company. It was as if she knew he didn't feel well and she did all she could to help him feel better...in her own cat way.  She was also kind and accepting to other animals who came into our home. On several occasions we dog sat for friends and before Annie lived full time at our house we would cat sit for her on occasion. While Gracie would hide and show her displeasure at these animal intruders coming into her home, Groucho would accept that they were here and would stay in their vicinity providing a warm welcome. Although, on occasion, I will say that she and Gracie would do their Ninja Warrior routine teaming up to attack Annie. But hey, cats will be cats!

We noticed about two years ago that Groucho was dropping weight rapidly. When we took her to the vet, he ordered several blood tests, and did manual exams. We were overwhelmed to find that she was a diabetic cat and also most likely had a tumor in her abdominal area. Thus began a difficult period of time with trying to regulate her blood sugar while making sure she was eating in order to gain weight. I never thought I would have the courage to give hypodermic shots but, for Groucho, I learned so we could give her insulin at home. Mr.thisandthat and I tried everything we could to try to save our girl but, unfortunately, we were not able to do so. On a sad day in February 2014 I held her while she breathed her last breath.

Let's not end the post with sadness, though. I am so blessed to have known Groucho and to have gotten to enjoy her for 13 years!  Lots of happy memories to recall and whenever Gracie curls up next to me and turns on that throttle of a purr box I can't help but think of the Grouch. And that makes me smile!

And speaking of smiling, I want to thank everyone for stopping by and spending time on my blog. I really appreciate your visiting! I always enjoy hearing from readers, so if you would like to leave a comment, I would enjoy hearing from you!  Tomorrow, I will finish up with my focus on the cats in my life with the final "tale" of a cat named Morris. You'll think I'm lyin' about this feline!! Until then....

Email ThisBlogThis!Share to TwitterShare to FacebookShare to Pinterest
Labels: Pets and Animals