Philosophy 101 from My Backyard

Finding Wisdom As I Walk 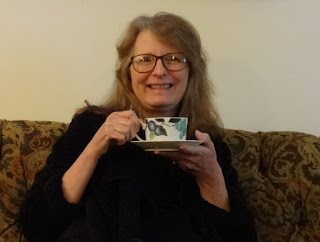 Hello everyone!  I took a walk around my yard today and snapped a few photos.  As always, there was some wisdom to be found as I walked and thought. So, I'm calling this post "Philosophy 101 from My Backyard."  Of course philosophy is not the same thing as wisdom but, I think you get the idea. So, grab yourself a cup of tea or coffee and enjoy the walk. 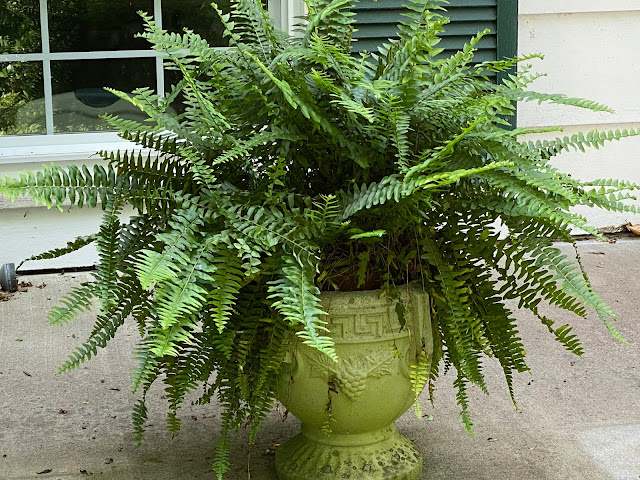 The ferns I planted on our front porch way back in May are finally starting to look full and pretty and green. I almost pulled them out of the planters a few weeks ago to toss them over the hill and wished I had not bought them. They had brown fronds in them that stuck straight out like a bad haircut and they looked weak and sickly. I had to do a bit of pruning on those brown fronds. Just goes to show that lots of water, the summer sun and the passage of time is what they needed to grow and flourish. Oh, and a little pruning of the fronds that weren't supposed to be there. Kind of like humans when God needs to do some pruning of our hearts to get rid of the fronds that don't belong there so that we, too, can grow and flourish. 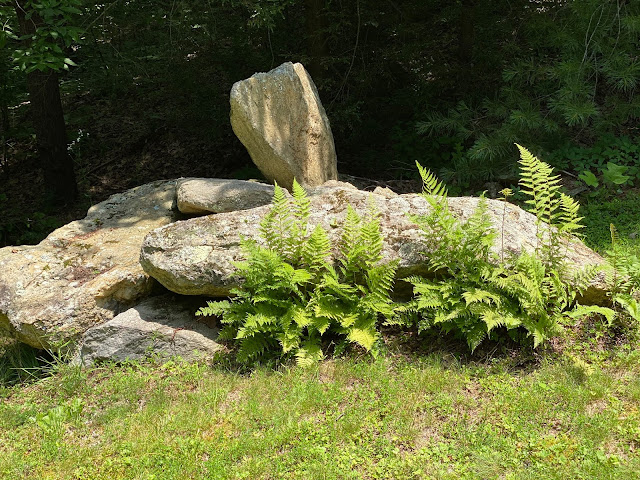 And these ferns didn't even need to be bought and planted, they just appeared!  Now, if I had planted these in that spot I bet they wouldn't have grown at all. Sometimes, when we least expect it, new growth happens in places we would never have dreamed. As always, God is the very best gardener! 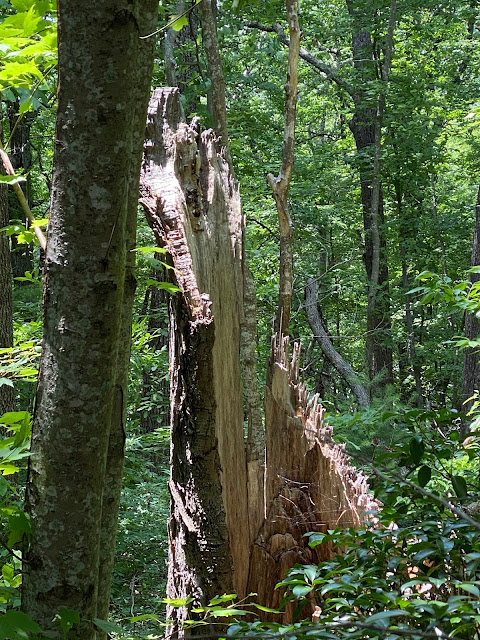 There isn't much left from the trunk of our huge "sacred tree" that fell over from the force of hurricane winds that blew through the mountains several years ago. We were told by a Cherokee tree climber that the tree was sacred because it had been hit by lightening and survived. When we bought this house we admired this giant tree with a big scar down the side. It stood as a sentinel in the woods close to our house for many, many years. Now, its jagged remains stand tall reminding us that life can leave a few scars and even blow us over. But, if our foundation is strong and secure, we can still stand tall and the jagged edges become part of our story and our beauty. 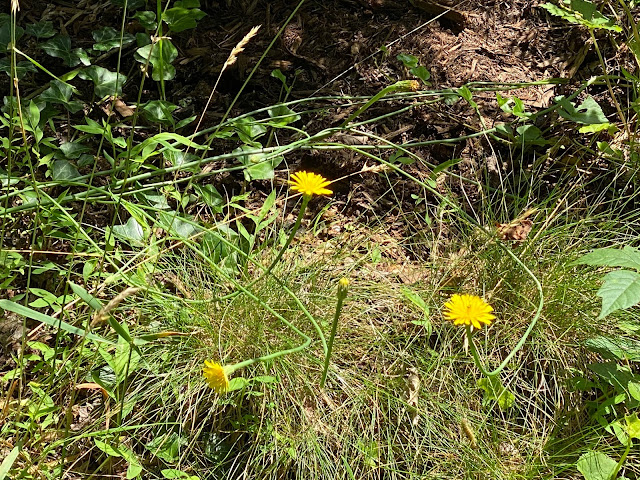 These weeds haven't been found yet by the Mr.  He pulls the heads off dandelions when he finds them so they don't propagate all over our yard. I kind of like dandelions, though. When I was a little girl I would look for dandelions that had gone to seed. I would pluck them, make a wish and blow the seed head as hard as I could, hoping that all the seeds would blow away in one breath. Because, of course, that would mean I would get my wish! Wouldn't it be wonderful if blowing dandelion seeds was all it took to make wishes come true? But, then again, perhaps we would make lots of silly and frivolous wishes that wouldn't end up being good wishes at all. Like, if we wished for a million dollars and it happened. But, then we still wanted more. And so we wished again. And yet, we still weren't happy.

There was a story that I used to read to my kids when I was teaching called, "The Fisherman and His Wife."  It was a fable about a poor fisherman who catches a magic fish. The magic fish talks the fisherman into letting him go, promising him anything in return for his freedom. The fisherman doesn't ask for anything and just lets the fish go and then goes home and tells his wife what happened. The wife is angry that her husband didn't ask for anything in return for sparing the fish's life and demands he go back to ask the fish for a better house. The poor husband does his wife's bidding and the fish is happy to give them a better cottage. But, you guessed it, the wife continues to be unhappy and keeps asking her poor husband to go back time and time again, asking the fish for more and more riches until....she finally goes too far and asks to rule the sun and the moon, at which time the fish sends the husband back to his wife to find her living in their original hovel. So, the moral is to be happy with what you have.

And, I'm kind of happy to have these yellow dandelions blooming among the weeds right now. I think they are pretty. And don't tell the Mr. but I might....perhaps....pick one once they go to seed and then close my eyes and make a wish and then blow with all my might. Because....well.....you never know. 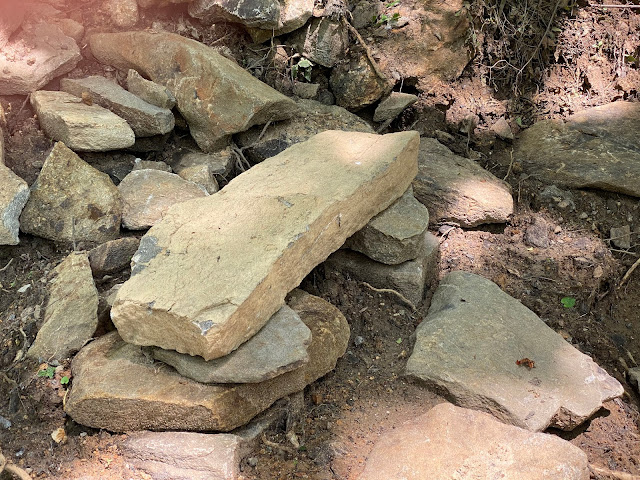 This is my new rock bench next to the stream that runs through our property. The Mr. asked me if I would like a bench made from some of the stones that were unearthed during our driveway building and I said yes. I think it will be my thinking bench. I can sit there and let my thoughts tumble like water over the rocks. I am prone to getting lost in my thoughts and imagination. This can be either good or bad depending on what direction my thoughts take. I love it when my thinking leads to creative, imaginative ideas. Or when I focus on happy thoughts, memories and plans for the future. I don't like it when I find myself dwelling on the negative, however. Because when that happens it can be hard to shake that black cloud hanging over my head. So, it behooves me to remember the following scripture and what it means for my thinking.


As someone thinks within himself, so he is.
-Proverbs 23:7
So, I want to control the thoughts flowing through my mind and not let them head to the negative. Easier said than done sometimes. Especially in today's world. So to help with this, I am reminded of the following familiar scripture:
Whatever is noble, whatever is right, whatever is pure, whatever is lovely, whatever is admirable — if anything is excellent or praiseworthy — think about such things.
-Philippians 4:8
This scripture will be a good one to focus on while sitting on my thinking bench. How about you?  What wisdom did you glean from today's post. Or...from a walk in your own backyard?
Until Next Time, Debbie

Posted by Debbie Styles Life at 12:30 AM

Email ThisBlogThis!Share to TwitterShare to FacebookShare to Pinterest
Labels: Devotional, Things I'm Delighted to Share, This and That Topics

This post is wonderful, Debbie. Yes, the title is apt, but I think the post is also full of wisdom. I enjoyed how you took lessons from nature and found applications to life. Your writing is superb!

God is certainly the best gardener, and the best artist! I enjoyed the walk around your yard, and the wisdom you pulled from nature. I am trying to keep my focus on verses like the one in Philippians and others that speak to character and traits that will keep us in line with God. It's when my focus strays that the trouble comes, so I'm glad you posted this verse today! I'm going to think about this and remember that God is on the throne, in complete control, and my job is to keep my eyes on Him! I do like your stone bench! It's such a wonderful thing to have a place to go to be alone with your thoughts! It's a lovely spot!

I find so much spiritual peace in nature. Love your blog. I want that stone bench! You are so fortunate to live in your natural cathedral!
Denice

Sharon, Karen and Denice:
You are all so kind to leave lovely comments!
Sharon-you are sweet to say my writing is superb! Makes me blush.
Karen-You're right that God is the best gardener! And I do love that stone bench.
Denice-I'm glad you find spiritual peace in nature. I do too. Bill calls the outdoors the "green cathedral" and I know what he means. Thank you for saying you love my blog!