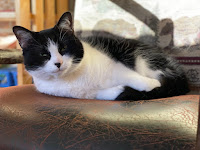 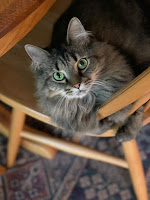 It was 10:00 a.m. on a Friday morning and my partner, Garden, and I were walking our beat. My name is Cassie; Detective Cassie Cat, #6 Feline Precinct. This is my third year on the job. I’m a Cat Detective and I’m good at my job if I do say so myself.

Things were looking pretty calm on the hallway this morning although we were late starting our rounds. Garden had insisted on stopping at our favorite watering hole for another sip of water and crunch of kibble before starting our day. I felt somewhat frustrated by this but she’s a younger cat so I humor her. Being an early riser, I had already eaten my usual breakfast and done my step exercises, dashing up and down the steps as fast as I could go, stopping only to rub my head against the third rail. An invigorating exercise that my former cat chief taught me early on in my detective cat training. He had been a brawny Tom, a true Scottish Fold, who meowed with a deep brogue and favored the water dish a bit more than he should have. But, he was a good Cat Cop and we respected each other. “Aye Cassie, do this run up and down the staircase every mornin’ and you’ll be ready to catch five mice afore sunset.” I could still hear his meowing brogue advising me and I purred contentedly at the memory.

We made a pass through Love and Softie’s bedroom and then on into the study. Garden yawned and looked bored. She had been regaling me with tales of her exploits the night before in the basement and how she climbed on the washer/dryer and then jumped into the window of the family room to watch foxes prowling at night outside. I shook my head in frustration. No wonder she was tired this morning and not in top feline form. No discipline, I thought to myself. She’ll never make Cat Captain at this rate.

It was when we rounded the corner into the kitchen that I realized something was amiss. The fur stood up on the back of my neck as I crouched low to slink slowly forward around the dining table to investigate. Sniffing the rug tentatively I slowly reached out a paw and, claw extended, pulled back the edge of the rug.

“I knew it!” I hissed.  “It was here yesterday and now it’s gone. We have a thief in our midst!” My head swiveled to check all around me in case the culprit was nearby but I saw only Garden who sat on her haunches, one leg extended, calmly taking a bath.

“How can you take a tongue bath at a time like this?” I shrieked. “Yesterday there was a pencil buried under this rug and today it’s missing. We’ve got to find it!”

Realizing that I was close to having a full blown cat hissy-fit Garden snapped out of bathing mode and gave me her full cross-eyed attention.

“Don’t get your neck fur in a ruffle,” she meowed  calmly. “The pencil has got to be here somewhere. It’s just been misplaced. Remember last week when you thought you had lost Mouse and then you found him under the living room chair?”

I bowed my head in embarrassment at the mention of Mouse. He was my favorite toy and I didn’t like Garden bringing him up. My losing Mouse briefly was a sensitive subject and Garden knew it. She liked to get me riled up sometimes.

“Be that as it may this is different. A pencil is missing and as the resident Cat Detectives it’s our job to find it!” I reached for my paw pilot and flipped it open to take notes. “Now, let’s assess what we know at this point.”

“We know a pencil is missing and it’s almost lunchtime.”  Garden’s eyes were already focusing on the nearby food dishes or, as she liked to call it, “The Cat Cantina.”

“Keep your mind on our work.” I growled back. “Pencils have been coming up missing all over our beat and I just don’t understand it. I find them laying on the floor, I bury them and then, poof, they’re gone when I check back. This case is really starting to get to me.”

I walked over to look out the French Door and saw one of our snitches, “Sammy the Squirrel,” lurking around the back porch.

“What about Sammy?” I meowed softly to Garden. “He might have seen something. He’s helped us out before.”

Garden snorted under her breath at my remark. “That squirrel’s only interested in nuts. He won’t tell us anything.”

I sighed and thoughtfully scratched my right ear. “Well, I’m out of ideas for now. Let’s head on over to the Cat Cantina and talk about our options while we eat.”

After crunching several mouthfuls of kibble I was feeling better and my thoughts began to flow again like cat sand through the sifter. Maybe I had been going about this whole thing the wrong way. I decided to test out my ideas on Garden.

“Who do you have in mind?” Garden said between mouthfuls.

“How about Pete the Pigeon?” I suggested. “He’s been a good stoolie when we needed him.”

“Nah, he flew North a week ago. Said a mean crow named Vinnie was after his tail feathers.”

“Hmm,”  I thought some more.  “Maybe Lenny the Lizard? Although I haven’t seen him around the porch in awhile.”

“Told me he was hiding out for awhile in some crack in a building. Didn’t want to be seen so he camouflaged himself for winter. He’s out of the picture, as it were, for awhile.”

Well, that did it.  All of my leads were turning up nothing, nada, zilch. My belly couldn’t get any lower to the floor.  When I got like this, there was only one thing left to do.

“I’m taking a cat nap.” I announced as I turned to go down the hallway. “I’ve had enough of this case for now. Maybe a good sleep will help.”

I padded slowly around the corner still thinking when a thought occurred to me. But, no, it couldn’t be. Or could it?  I turned slowly around and looked at Garden who looked up at me with questioning eyes.

“You aren’t involved in this somehow are you?” I asked with hesitation. She was my partner and I didn’t want to say what I was thinking. But, she did have a history.

“Who me?” She asked innocently. “How could you think such a thing?”

“Well, there was that incident with Mouse that time. You know…..ending up in the litter box?”

I hesitated to bring this unhappy incident up again. But, there it was. I had looked everywhere for Mouse, couldn’t find him and then, there he was, face down in the sandbox. Garden had been effusive with apologies. Called it a “joke gone wrong.” I wanted to trust her. But….she had been on the streets for a long time before joining the Cat Detective force. Maybe old habits died hard.

“Hey, you talkin’ to me?  Your partner? My paws have been clean for over a year now. How could you think such a thing?!”  Garden appeared incensed at my suggestion and I felt half guilty for asking her. I shook my head to clear my thoughts.

“Sorry, sorry. This case is making me crazy. I've got to get in a few winks. I’ll see you later.”  My tail swished side to side as I made my way down the hall to Love and Softie’s bedroom. Soon, I was curled up on a blanket snoring softly.

A soft thud was heard on the kitchen table.  Dark eyes glanced swiftly from side to side as a black and white furry paw furtively shoved the pencil to the edge and then downward, the pencil spiraling as it fell to the floor.

Jumping silently to the floor the paw moved quickly, one claw delicately extended, as the rug was drawn back and the pencil shoved under with the other paw. The task done, the culprit gave a quick glance around for safety and then descended the stairs to the basement with the darkness swallowing the stealth pawed thief into the night. Only a soft meow could be heard in the darkness, “Heh, heh, heh…..”

Written by: Debbie Ross
Hope you enjoyed!
Feel free to leave a comment.

Email ThisBlogThis!Share to TwitterShare to FacebookShare to Pinterest
Labels: Pets and Animals, Things I'm Delighted to Share, This and That Topics

Debbie, this is wonderful! I thoroughly enjoyed it. I think it should be published!! I hope you write some more of this type of story and post them.

Debbie, I LOVE this story!!!! You, um Cassie I mean, is such an excellent writer, you, um Cassie should write books. I'm saving this, sending it to my sister and I will read it to my mom! Such a talent!!! Please write more of these! It's so fun and so well done!!

This is so cute and so well done. Quite professional and I loved every minute of it. You are so talented! Looking forward to the next installment.

Cute and fun story Debbie. Are you thinking of publishing it? Maybe a few short stories? Thanks for sharing.

Great fun, thanks for posting it. It's always nice to start off the week with a smile.
xx

Thank you for sharing at #OverTheMoon. Pinned and shared. Have a lovely week. I hope to see you at next week’s party too! Come party with us at Over The Moon! Catapult your content Over The Moon! @marilyn_lesniak @EclecticRedBarn

I Teach Christian Education Courses Online Through Be A Disciple