What's In My Reading Basket 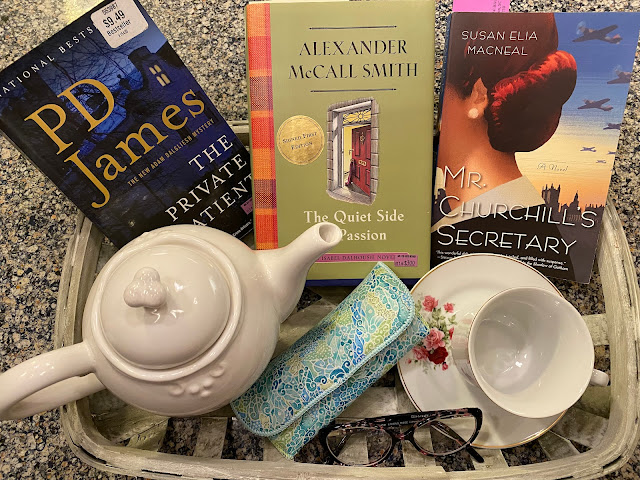 Hello everyone! I have been trying to widen my horizons lately with reading and have chosen some books that are new reads to me. After spending time re-reading my old favorite books these past months, it has been fun to branch out and try a couple new authors as well as a new book in a series I have followed in the past. I thought you might enjoy hearing what's in my reading basket. Perhaps you will get some ideas for a book you might enjoy.
1. "The Private Patient" by PD James
This author was new-to-me and although it took me a few pages to get into the book, once I was in I was hooked!  This is a mystery about a woman who goes to a private clinic to have plastic surgery done and is then murdered. Everyone who is in service at the clinic is suspect and it is up to Commander Dalgliesh and his team to figure out who committed the murder. Along the way, the reader learns about the fascinating back stories of the inhabitants of the clinic as well as of Commander Dalgliesh. I believe that many of the books by PD James have been made into movies and some were shown on PBS. I would like to read more of the Commander Dalgliesh murder mysteries and will be looking for more in the series.
2. "Mr. Churchill's Secretary" by Susan Elia Macneal
This was another new-to-me author and the fact that the book was set in WWII with a strong female heroin reminiscent of Maisie Dobbs caused me to choose this book to read. The heroin is Maggie Hope who is hired to be a typist for Winston Churchill after Neville Chamberlain resigns as Prime Minister of England. Raised by her aunt in the US and a graduate of Wellesley, Maggie has forgone working on a graduate program in mathematics at M.I.T. in order to return to England, the land of her birth, and sell her grandmother's house. Instead, Maggie ends up remaining in England as the war is starting and shares the house with several female housemates. As the story unfolds, Maggie becomes embroiled in state secrets and espionage as she proves her worth, not just as a typist, but as a mathematician.
I enjoyed this book to a point. The story kept my interest and I rooted for Maggie as she fought to be recognized for her intelligence in the "mans's world" that existed in the 1940's. However, some of the four letter words used throughout the book disturbed me as well as the true-to -life depictions and descriptions of torture, bombings and how Jewish people were treated in Germany and elsewhere during WWII. That was upsetting to read about. So, I found myself putting the book down during these sections. This is the first book in the "Maggie Hope" series. I will say that the next book in the series sounds interesting as it involves Maggie Hope working for MI5 in the Royal Palace while undercover as a math tutor for Princess Elizabeth. I may be looking for that one to read.
3. "The Quiet Side of Passion" by Alexander McCall Smith
This is the book I am currently reading and is part of the Isabel Dalhousie series. I have enjoyed this series in the past but have not read the last few books. When I saw this one at the used book store I picked it up as a Christmas gift to myself and I am enjoying it immensely.
Isabel Dalhousie is first introduced in the book, "The Sunday Philosophy Club." She is a philosopher who edits a magazine called, The Review of Applied Ethics. Now, she is also a wife and mother of two little boys and enjoys music, assisting her niece, Cat, at the delicatessen and solving issues and mild mysteries that involve the use of her philosophical skills.
To me, all of the books in this series are what I consider a "gentle read" and I am happy to have this after the more intense read of the Maggie Hope book. I see there is another book in the series after this one so I hope to pick it up, as well.
Hope this gives you some ideas for books you might enjoy reading! Let me know what books are in your reading basket in the comment section. I love hearing from you!
Until Next Time,
Debbie
Posted by Debbie Styles Life at 7:48 PM

Email ThisBlogThis!Share to TwitterShare to FacebookShare to Pinterest
Labels: Books

Thank you, Debbie! I was looking for new books just tonight! I’ma big Alexander McCall Smith, but haven’t read much of his work outside the No. 1 Lady Detective series. I am looking for “gentle reads” (I love that term!) and am so glad to be reminded of his other series.

HaPpY reading too is both!!

I always like to hear what you've been reading. I also find myself gravitating toward "gentle" reads. I just finished The Restoration of Celia Fairchild, the newest book by Marie Bostwick. She often features female friendships and crafting or quilting in her books, and I enjoy that.

I like gentle reads too, that include a great story that I can relate to. I'm currently reading quite a few Lynn Austin books and especially enjoy the ones that take place during WWII. Maybe a biography on Maggie Hope would be different and more enjoyable. Not sure there is one, but I'm going to look. I remember her from the movie and would like to know more of her story.

Thanks, Lay! You will enjoy Isabel Dalhousie!!

That sounds like a good book, Sharon. I'll have to look into Marie Bostwick.

I'll have to look into the Lynn Austin books, Karen. I don't know if Maggie Hope was a real woman or just a character. I'll look up the name and see.

I guess her name was Elizabeth Nel. I remember her in the movie and admired her for keeping up with a man with such a strong personality. She had such an interesting job. I'd like to read more about his wife too. I'll have to look into this too!