A Little Bit of This and That 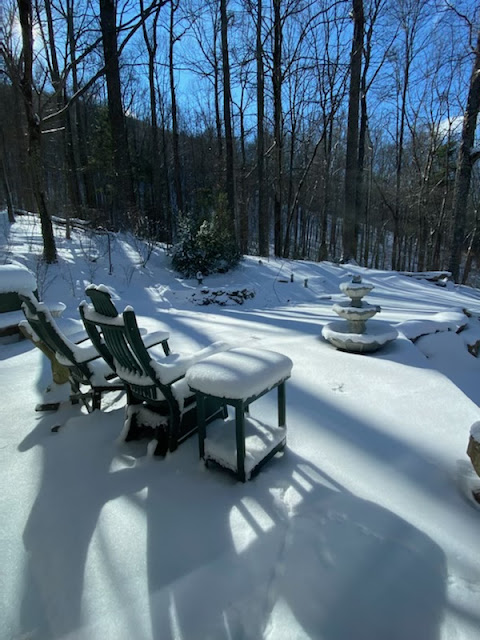 Here we are already at the end of January and it's time for a little bit of this and that where I share random bits of what's been happening around my world with you. We had more snow Friday night into Saturday and although the main roads in Asheville are now clear, our road continues to have snowy and icy patches. I truly don't like driving when there is ANY snow or ice but I did get out for a little bit this afternoon with The Mr. driving our trusty Subaru. I still didn't like our road, though. 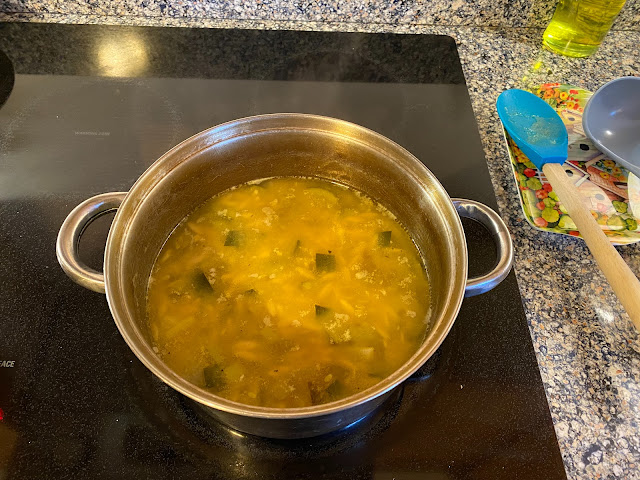 Every time it snows I seem to feel like I need to make soup. Saturday was no exception as you can see here. I combined zucchini, onion, celery, potato, chicken broth and orzo together and let it all simmer until tender and delicious. 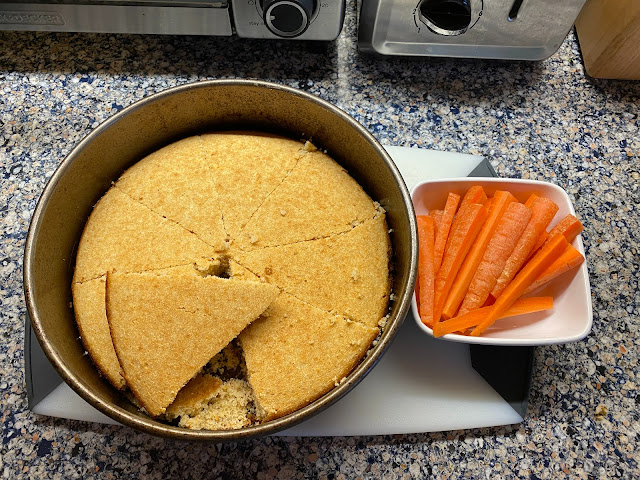 And, of course, since I made soup, I had to make a cake of cornbread to go with it! I can never get my first piece to come out cleanly though! 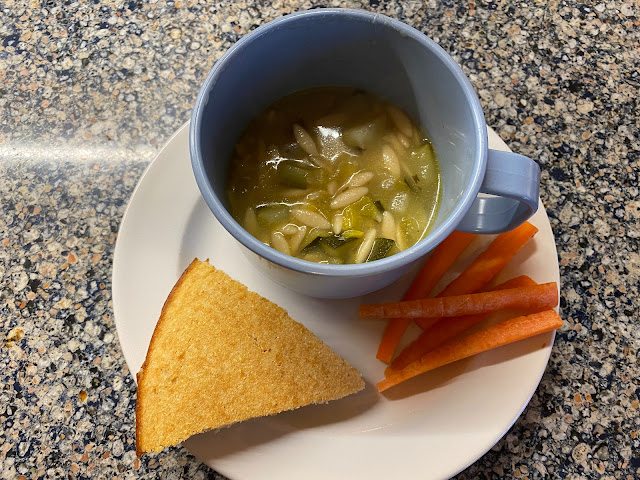 And as the British would say, it all went down a treat together especially with some added carrots! Soup is always so comforting on a snowy and cold day. 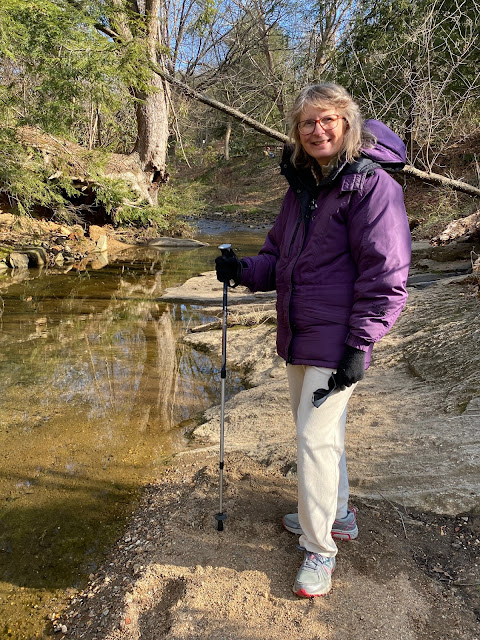 Last week, before the snow flew again, The Mr. and I took some hike/walks together. This pic was taken next to UNC-Asheville next to the stream. This was the most rugged part of our walk for sure. We strolled on the Reed Creek Greenway prior to this and enjoyed experiencing a new walk on sidewalks the whole way. This pic was next to the Botanical Gardens at UNCA and feels more like a trail. 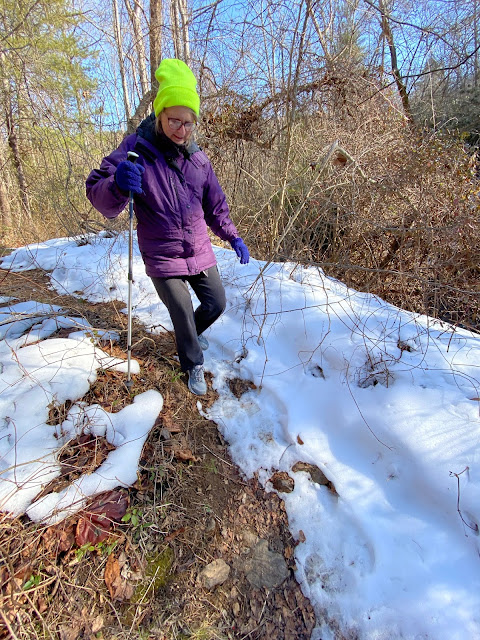 We also hiked a few days later to the dam at Lake Powhatan near the NC Arboretum. 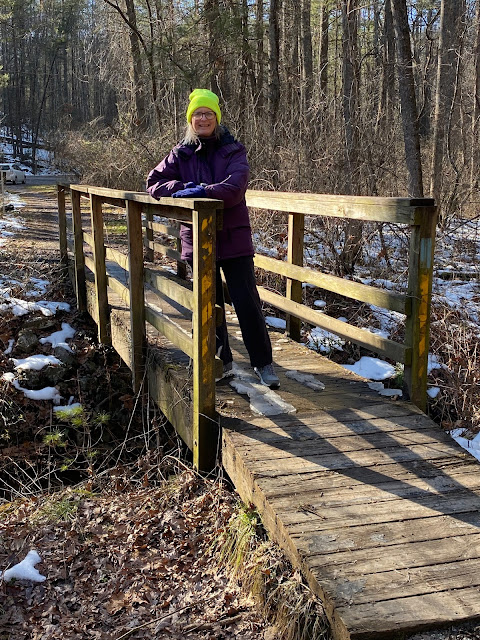 There was still some snow on the ground from the previous weekend's snow, although it was mostly avoidable. This was a pretty little bridge along the trail. 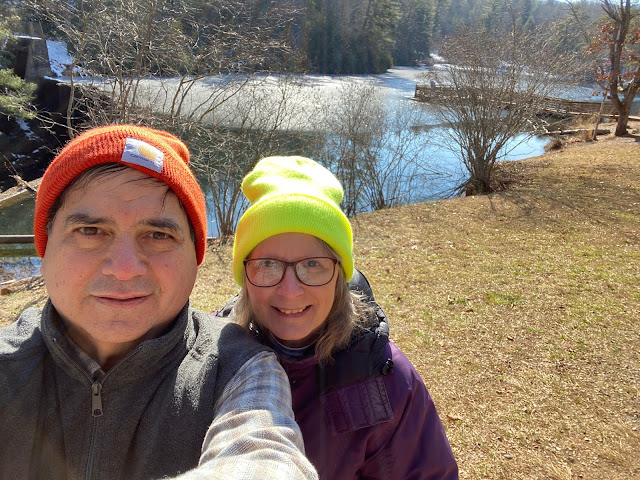 And Lake Powhatan was really pretty. Parts of it had thin ice on top. It was a nice hour long hike which was definitely Debbie approved! 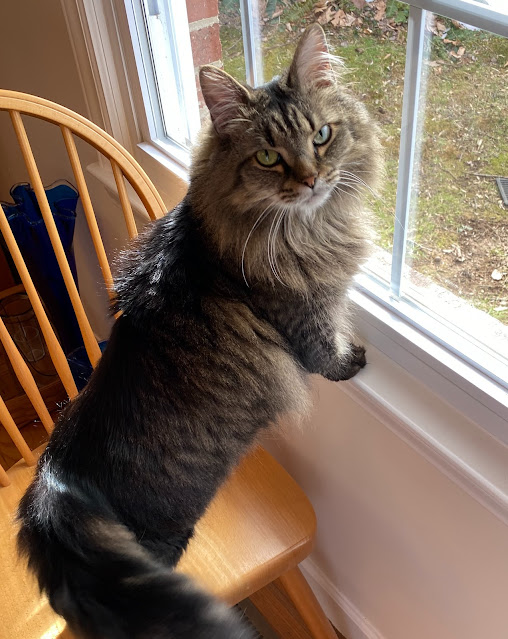 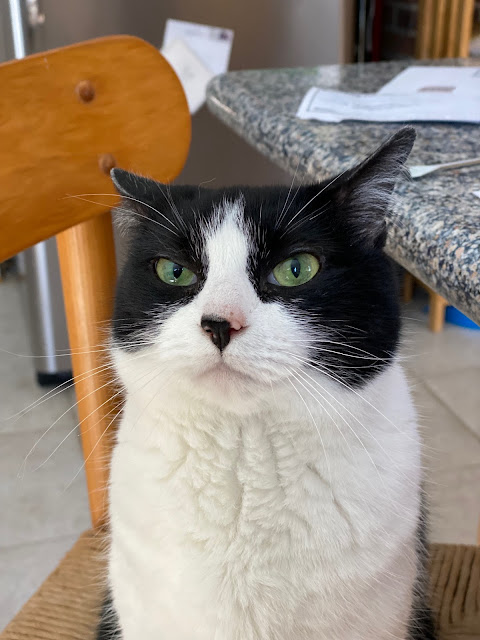 And, finally, these two goofballs have been keeping me on my toes with their crazy antics. They love to watch the birds, chipmunks and squirrels out the back door. They sleep most of the day and then decide to go racing through the house around 9:30 at night chasing each other! (Cassie would like for me to amend that last statement and let you know that she most certainly does not sleep most of the day, however Garden does!) And both girls are excited that there is a cat in the White House now and are anxious to see what Willow will accomplish during her time there!
What's going on in your part of the world?
Until Next Time,
Debbie

Email ThisBlogThis!Share to TwitterShare to FacebookShare to Pinterest
Labels: This and That Topics

I always enjoy your "this and that" posts! Your soup looks so delicious and warming. And of course, I like to see pictures and hear updates about Cassie and Garden.

Of course you must have cornbread with soup. Both look delicious.

You're very brave to go out in the snow. Those days are over for me and since I've always been cold natured, were never that much fun. I do love sitting in front of a warm fire and looking out at it. Thanks for sharing.
Iris

Thank you Sharon and Iris for your comments. I always love hearing from you both! I hope you enjoy a great week ahead!