A Fun Sunday Afternoon In Tennessee 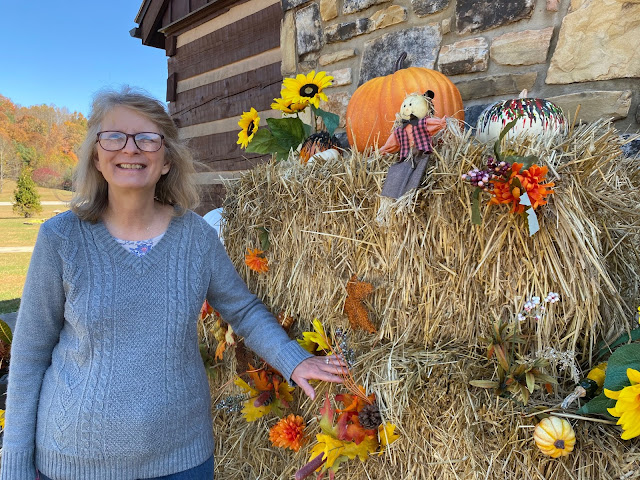 Hey friends!  I have a picture-heavy post for you to see today. The Mr. and I haven't done a Sunday drive for quite a long time.  So today we decided to go on an "adventure" together to Elizabethton, TN. This is a town I have driven by a lot here lately on my many treks to West Virginia. However, I have never been to Elizabethton until today and I must say it is a quaint little town with a lot to see! The Mr. has been driving through this town a lot lately on his way to hike on the Appalachian Trail and he wanted to show me some sites that he has noticed but not spent time really visiting. The pic above was taken at the Tennessee visitor's center. The center was decorated for Autumn. 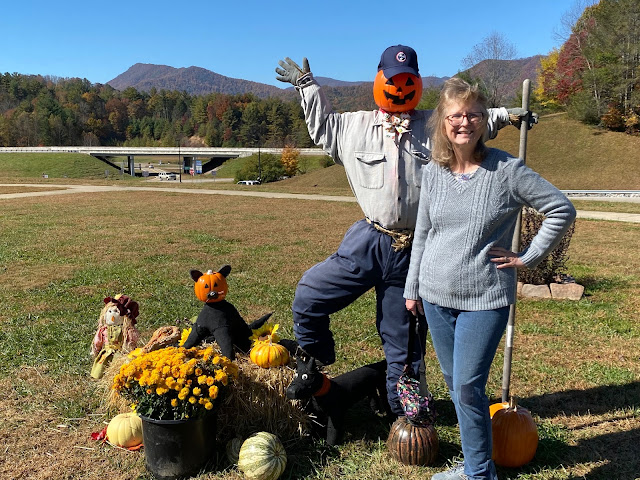 And although The Mr. thought it was a bit tacky, I had to have my picture made with this guy as well. After all, we were playing tourists for the day! 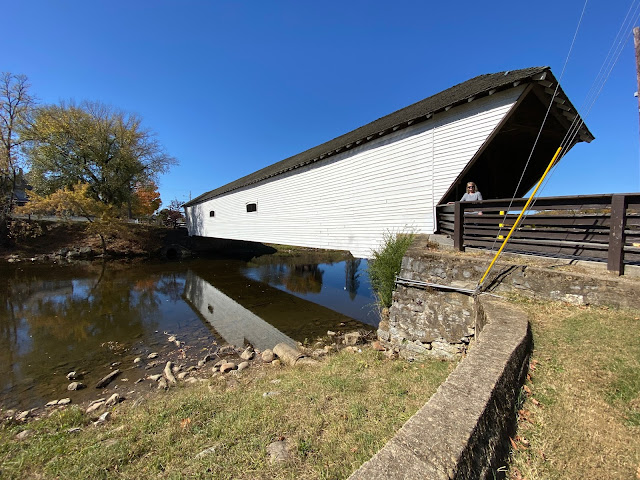 Our first stop was this covered bridge located in the heart of downtown Elizabethton. It's on a walking tour and has parking beside it which made it easy to stop here and walk around for a bit. 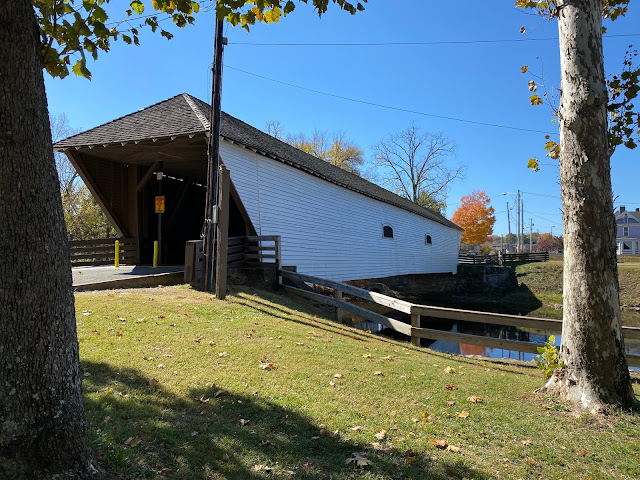 The covered bridge is over Doe River and was built in 1882 at a cost of $3,000. I haven't seen covered bridges outside of New England so it was fun to see this today. 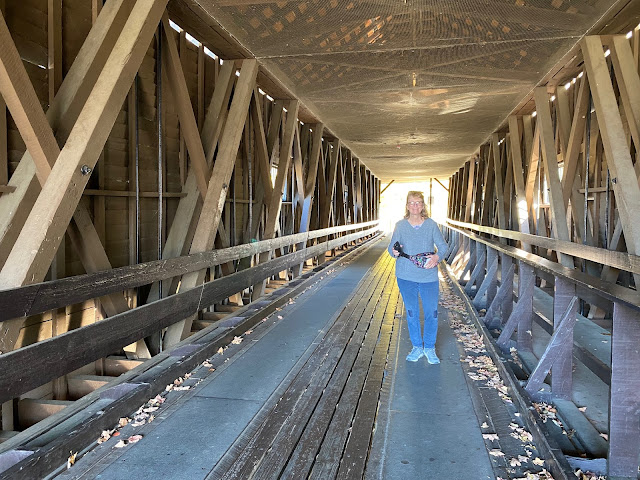 Only foot traffic was allowed inside the bridge and the floor of the bridge has been reinforced. You could see between the floor boards, however, so I kept a tight grip on my phone! 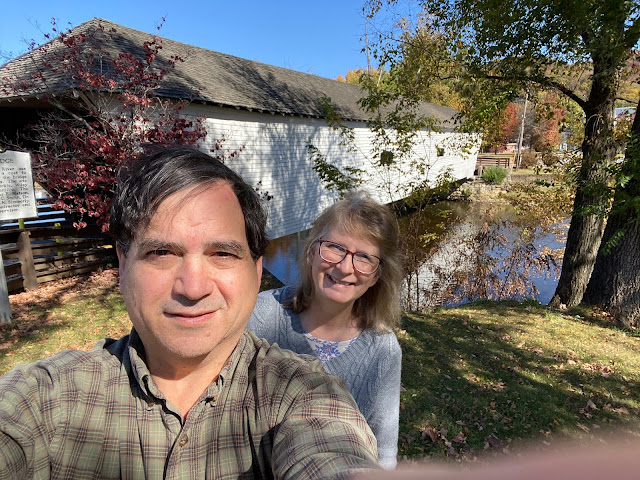 This is our only pic of the two of us together on this little adventure. After visiting the bridge we did a little walking tour of historic homes that were located nearby. The homes were really beautiful! 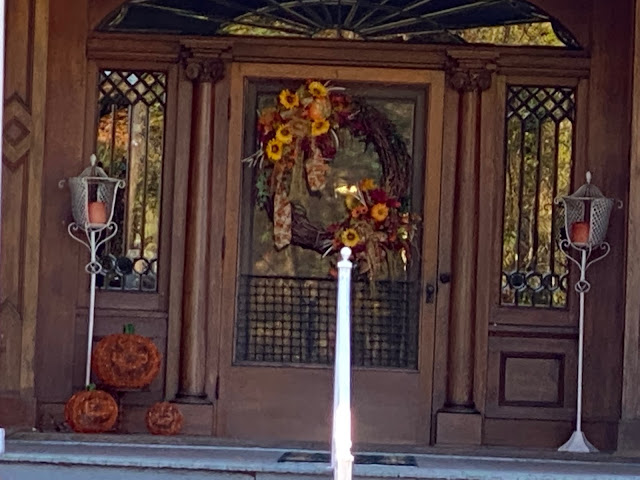 I loved this front door with leaded glass panes. Many of the homes were decorated for Autumn/Halloween. This was an historic cottage. Several of the homes had either large sitting front porches or wrap around porches which I love! 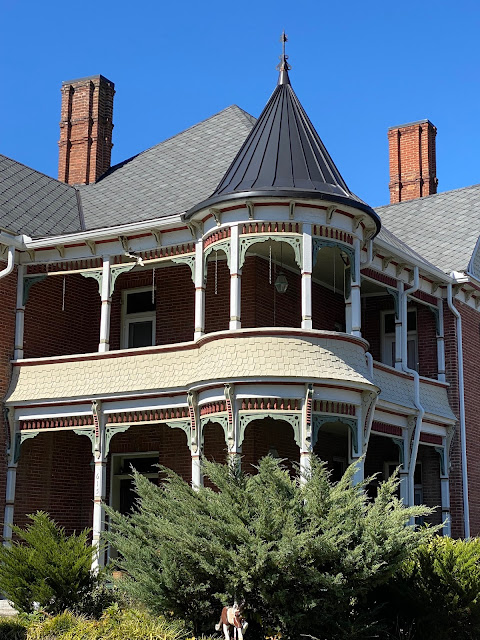 Look at the turret and the beautiful details of this house! 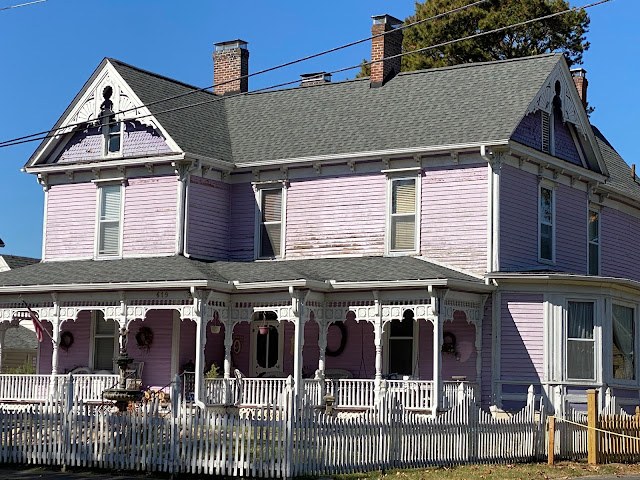 And this house needs a little love but was still beautiful. Can't you imagine sitting on that lovely front porch with a glass of iced tea in one hand and a good book in the other? I think I could pass many happy hours here. 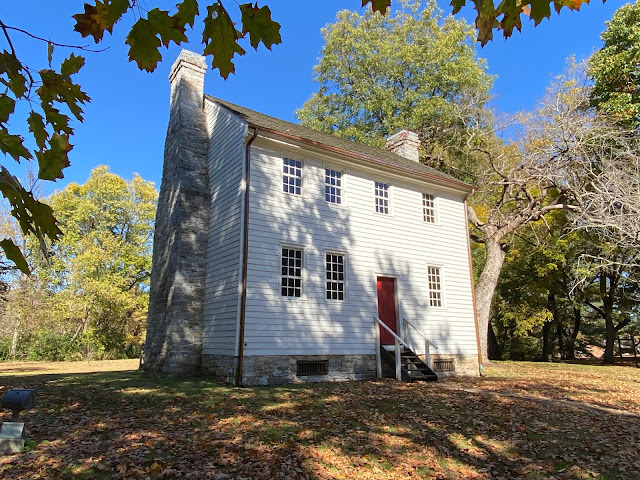 After a quick lunch at Subway (fine restaurant dining was not on our radar today) we headed onward to The Carter Museum which you see here. 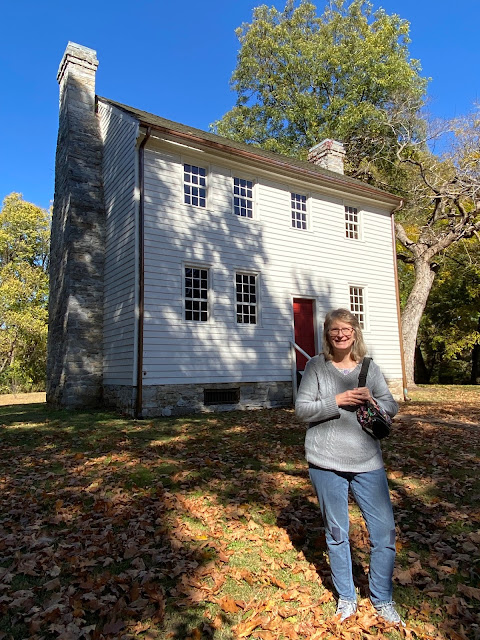 Unfortunately, the house was not open for us to tour inside but we enjoyed walking on the grounds and looking at the family graveyard to the East of the house. The Carter Mansion is the oldest frame house in Tennessee and was built between 1775-1780. The owners were brothers John and Landon Carter. The county was named after John Carter and Elizabethton was named after his wife Elizabeth. There is also another historic house in Elizabethton called "Sabine Hill." We didn't make it to that home today. 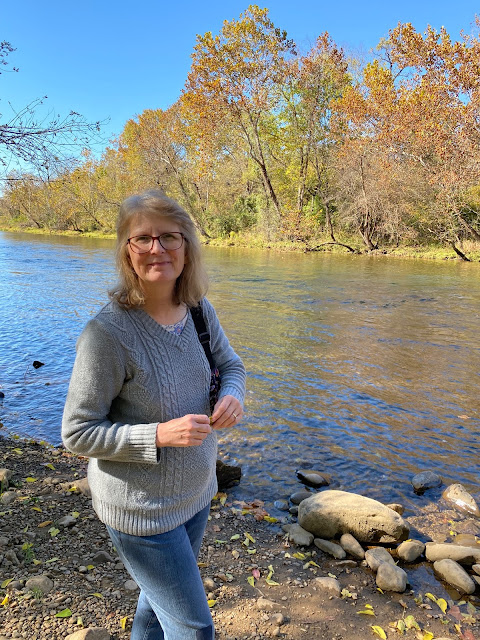 The Watauga River flows in behind the Carter Mansion making for a picturesque spot. 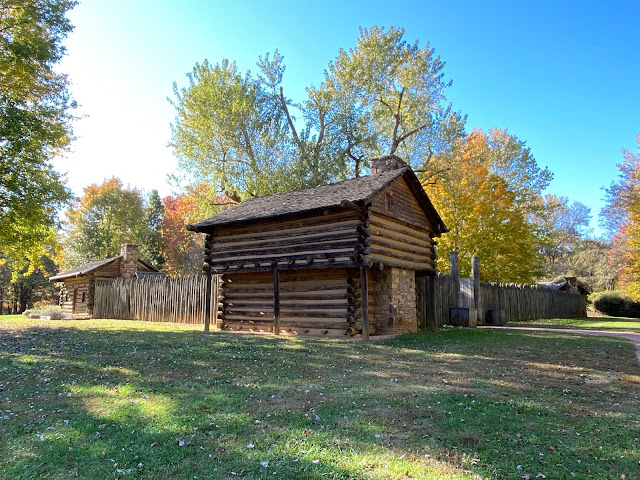 Our final stop for the day was at Sycamore Shoals State Historic Park which houses a replica of Fort Watauga. This was one of the first permanent American settlements outside the original thirteen colonies. The actual fort was located about one mile away and was the homestead of Matthew Talbot who operated the first gristmill in the Watauga settlement. Due to concerns about attacks from the Cherokee, who were aided by the British Army hoping to defeat settlers during the Revolutionary War, Talbot's land was chosen to use as a safe place for settlers to go to should an attack happen. Indeed on July 21, 1776, almost three hundred Cherokee warriors attacked Fort Watauga. The attack lasted for about three hours with sporadic attacks happening over a period of two weeks. Up to 150 settlers took shelter inside the fort. Eventually, the Cherokee fled further south and the Fort was left in peace until the remaining Talbot family moved to Georgia in 1785. 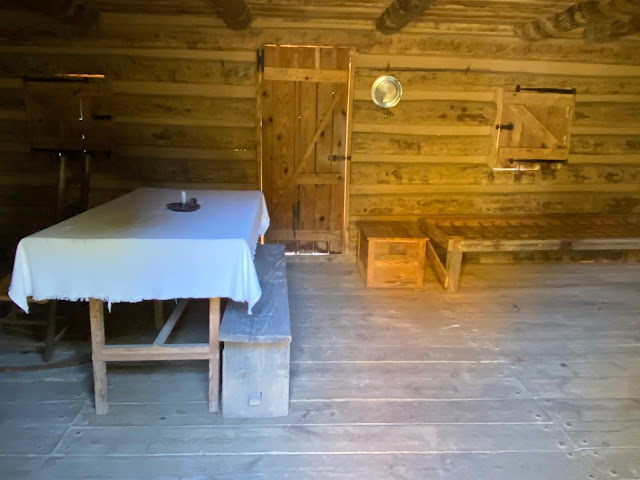 I can't imagine how 150 people managed to live together in these sparsely furnished little cabins. 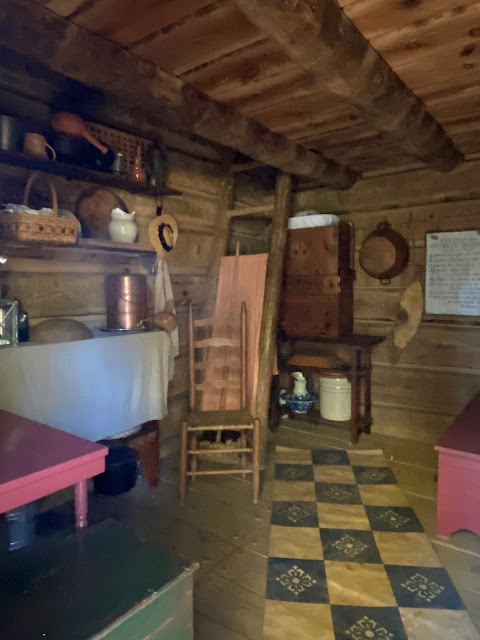 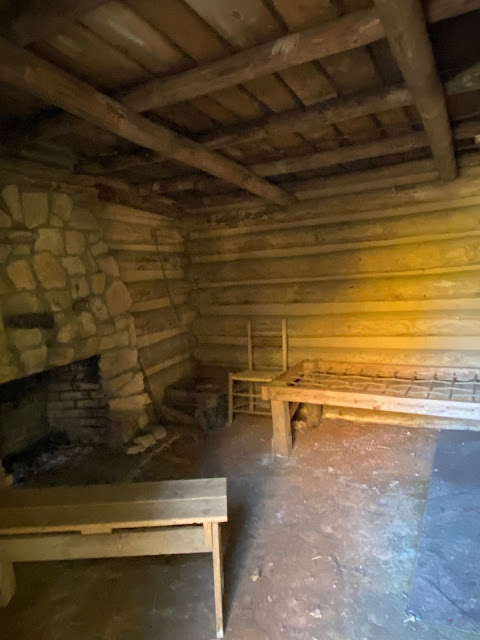 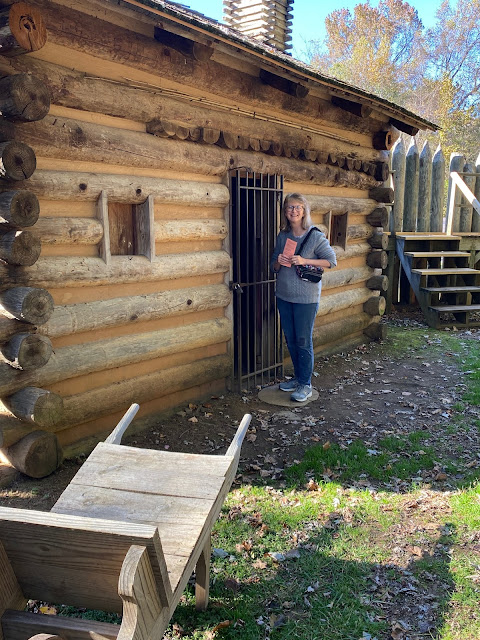 There were only five cabins inside the fort. I imagine many people slept out in the open. 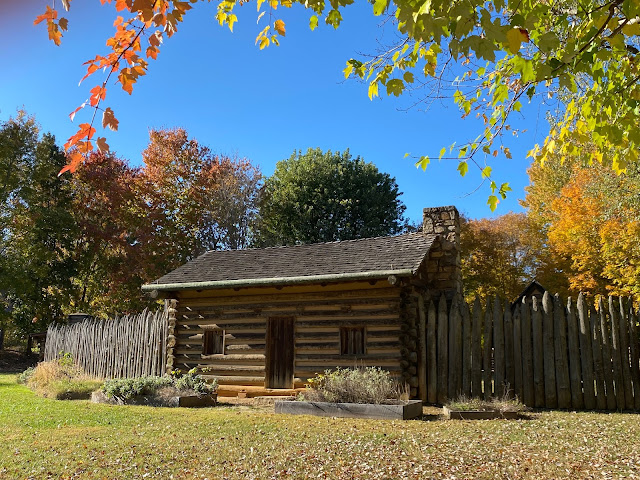 It was quite interesting to read about the history of this area. The Cherokee, of course, were here first before their land was encroached by settlers. It was interesting to me to learn about how the British Army provided guns and ammunition to their Cherokee allies. Later, in 1780, the Overmountain Men came together once more on these grounds to assemble and travel over the mountains to fight against The Loyalist Army, led by British Major Patrick Ferguson, at King's Mountain, South Carolina. The Loyalist Army was defeated and this battle helped to win the American Revolution. 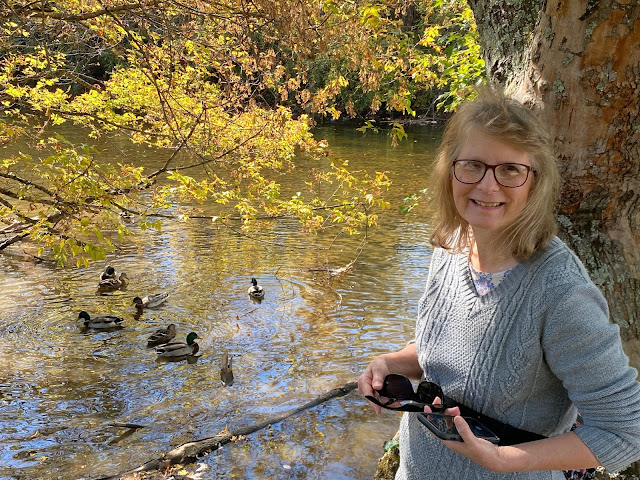 Our little adventure today was filled with history, beautiful homes and gorgeous scenery. Not a bad way to spend a Sunday afternoon!
How about you? Do you like to be a tourist for the day? What have you done recently that you really enjoyed? Be sure to let me know in the comments, okay?
Until Next Time,
Debbie
Posted by Debbie Styles Life at 8:19 PM

Email ThisBlogThis!Share to TwitterShare to FacebookShare to Pinterest
Labels: Educational Topics, This and That Topics, Travel

So enjoyed tagging along with you for your day trip to Elizabethton. Had to look on the map to see how far that is from my sister in Crossville. Going to recommend they visit Elizabethton some weekend. My husband would be fascinated by the history in the old fort. Those houses with their gingerbread and fancy trim are the kind of house I always dreamed of living in.

Looks like you guys had a very pleasant outing. Thanks for sharing.

What a nice Sunday outing! I enjoyed seeing all your pictures and learning about the history. You and the Mr. find such intriguing places to visit.

What a fascinating trip. I know so little of American history but that's the best way to learn - proper hands on stuff. Thanks for the visit. xx

Oh I loved going with you and seeing these lovely homes. There are SO many places that old things are just ripped down and something "new & modern" was put up. (Do you get the idea I'm not crazy about new & modern?) I do love the old stuff though. Thanks for sharing, sounds like a fun day.
Iris

I love day trips! And this one looked perfect! 🍁