Some Loves and Some Likes 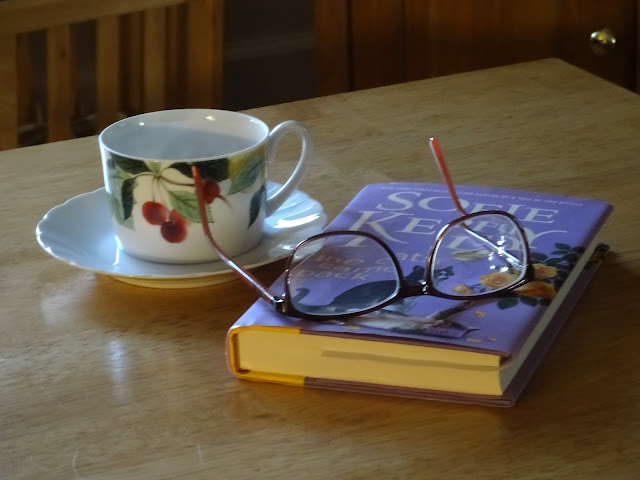 It's been awhile since I have shared some things I'm loving with you and I thought today would be a good day to catch up! First up are some books that I'm currently reading. One I'm loving and the other.....well, I like it somewhat. 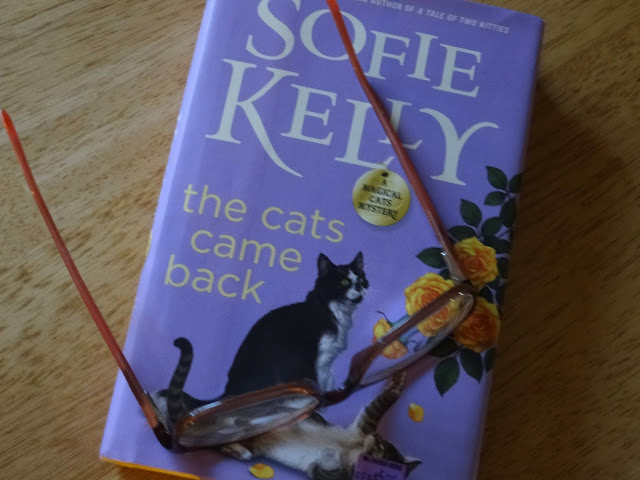 The book I'm loving is, "The Cats Came Back" by Sophie Kelly. This is one of the latest entries in the Magical Cat Series. I absolutely adore the two cats in these books! Owen, the tabby, and Hercules, the tuxedo, are more human-like than cat-like in so many ways! Kelly has a way of describing their behaviors, facial expressions and oddities that just makes their personalities come alive! These books are gentle mysteries with Owen and Hercules helping their owner, Kathleen, solve the mystery with a little help from their "magical" ability to walk through walls and disappear at will. I highly recommend this series to anyone who loves gentle mysteries (meaning there is always a death to investigate but no gory stuff) as well as cats and libraries. All of those items are right up my alley! 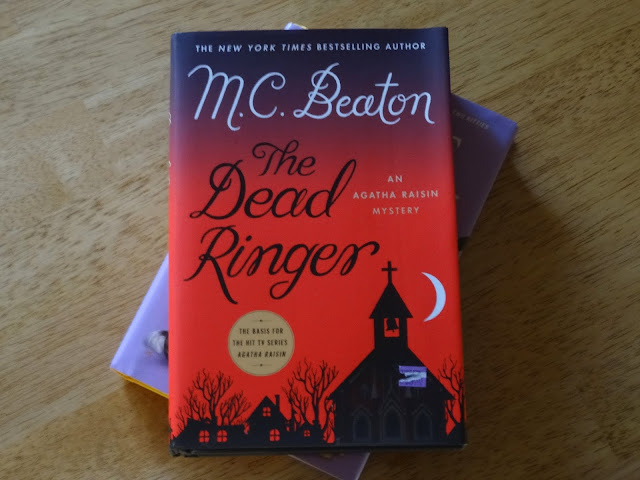 The other book I'm currently reading is also part of a series, the Agatha Raisin Mysteries by M.C. Beaton. I'm a bit disappointed in, "The Dead Ringer," however. I was drawn to this book because I have always found Agatha Raisin to be a humorous character and the fact that this story centered around bell ringers in a church also caught my eye. I have read so many books in this series, but I have found recently that the writing just isn't as good as it was at the beginning of the series. I found the same thing happening as the last books of the "Cat Who" series by Lillian Jackson Braun were being promoted. It just seemed like the writing wasn't the same, and the characters were not doing things that were true to their earlier selves. I began to suspect, as I am doing with the M.C. Beaton books now, that either a ghost writer was doing the writing or the author just didn't have her heart in the process anymore. So, while I'm not hating this book, I'm not loving it either. It's more of a "like" situation. I'll finish it but I don't know that I will bother to buy more in the series. Perhaps I'll just check the book out at the library if I want to read another in the series. 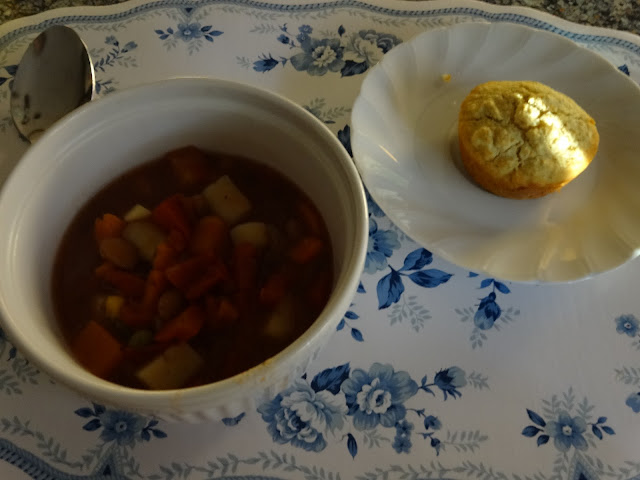 Now, I'm definitely loving hot soups right now! November is the start of soup season at our house and whether it's a vegetable soup served with cornbread..... 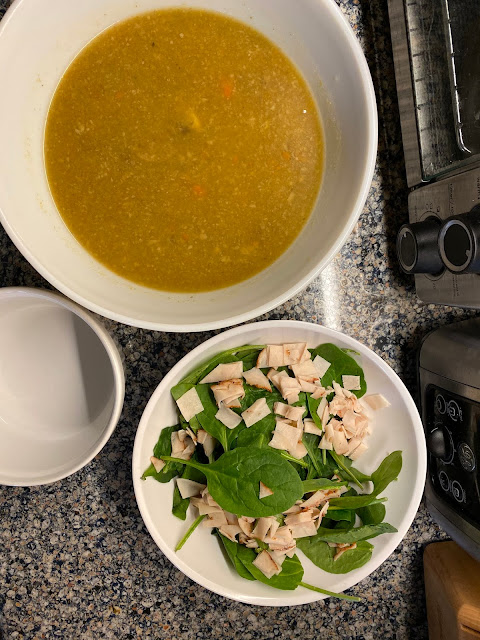 Or a mushroom soup served with a green salad, I'm all for soups which are super simple to make and healthy and tasty to eat. I'll give you a hint for how to handle soups when they are too thin which is what happened to me today with the mushroom soup. I usually add a potato to the soup mixture (mushrooms, broth, carrots and onion) which helps with thickening it but, today, I forgot! No worries, though. I just opened a package of instant potatoes and added a little bit to the soup. It thickened it right up. Just add a little, not the whole package or you will have mushroom mashed potatoes!!  I also used an immersion blender to make this soup smooth and luscious! 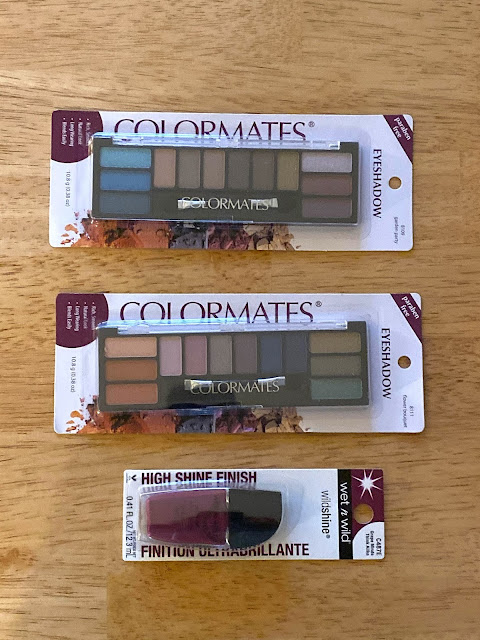 Now, I hate to admit that I love new eye shadow, but I can say I really like it! There is just something exciting about choosing a new eye shadow palette that I just love! These colors caught my eye for Fall along with a pretty nail polish that promises high shine. I'm a girly girl and like to play with the make-up from time to time even though I don't wear eye shadow or nail polish every day. 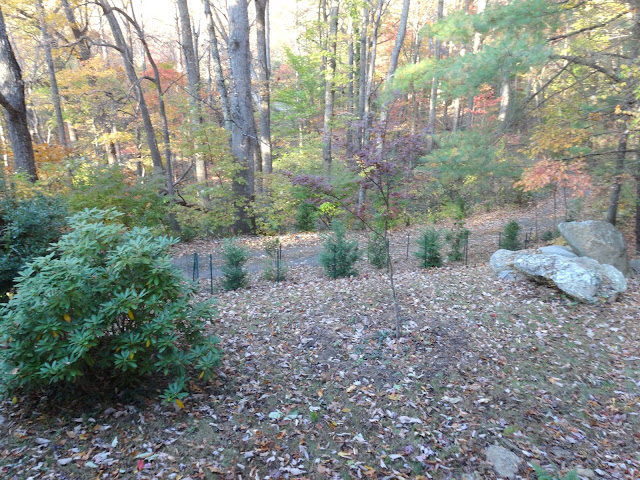 And, finally, I'm still loving the Fall colors even as they become more and more muted. I love seeing leaves on the ground and when I walk around outside and smell that leafy, earthy scent of the leaves I feel happy! Although we do some raking/blowing of leaves my husband mostly mows over the leaves which mulches them up and they just disintegrate into the soil. It works for us better than all the raking and blowing that goes on around us in the neighborhood.

I hope that you are finding lots of things to love (or at least like) as the week progresses. Leave a comment and let me know what you are enjoying, OK? Can't wait to hear from you!

Until Next Time,
Debbie
Posted by Debbie Styles Life at 7:46 PM

Email ThisBlogThis!Share to TwitterShare to FacebookShare to Pinterest
Labels: Books, Food, Things I'm Delighted to Share, This and That Topics

Your blog post reminds me that simple delights can bring pleasure and joy. I'm with you in loving soups this time of year. I actually like to eat soup year round, but there is nothing like a warm soup on a crisp autumn day when there is a chill in the air.

I have a few questions! Does anything bad happen to the cats in the story, do they die or are there otherwise sad parts? I'd like to get it for my mom but it would have to be squeaky clean and upbeat for her to enjoy it. Also, where did you find the makeup, specifically that nail polish? Such a beautiful color! I truly enjoy those makeup palettes too...so much fun to play around with them and maybe change up a look! If I missed where you got them, I'm sorry, but truly would like to know!

Hi Karen:
No, nothing bad happens to the cats in these books. The "magic" is not witchcraft stuff or anything, just abilities that Kathleen can't understand where it comes from and keeps secret from her other friends. There is a romance between Kathleen and the detective in the book but no sex scenes at all. Just a kiss now and then. Someone always is killed in the books and the other characters react but it is done in a way that is not intense at least in my opinion.

The makeup came from Dollar Store, would you believe it? I love the colors of the eye shadow and the nail polish. The polish is Wet N Wild brand which many drugstores sell, also. The eye shadow goes on smoothly even though it is a "cheap" brand. Hope this helps!

Thank you Debbie! I'll have to get her the book, and read it myself! Thank you for the makeup information. I just love that polish and the fact that it's glossy!

Home made soups are wonderful - I make them a lot and always enjoy them. Healthy and usually frugal. Great for using up bits and bobs too.
xx

I read this post when it first came up and I liked your eye shadows. I thought "Maybe I could use a new pack of eye shadow." so I got a new one the other day and it is really nice to have a few extra choices.

Also, I didn't really pay attention to the soup that you had posted but looking at it just now I realized it is probably the same type of soup I just tried yesterday. I had a can of Golden Mushroom soup which I have never tasted before. I always add chopped onion and more mushrooms to my canned soup. I usually use Cream of Mushroom but trying this Golden Mushroom was a real treat. I will be having it more often.