How Do You Make A Fall Wreath and Paisley Pumpkins Using A Too Small Shirt? 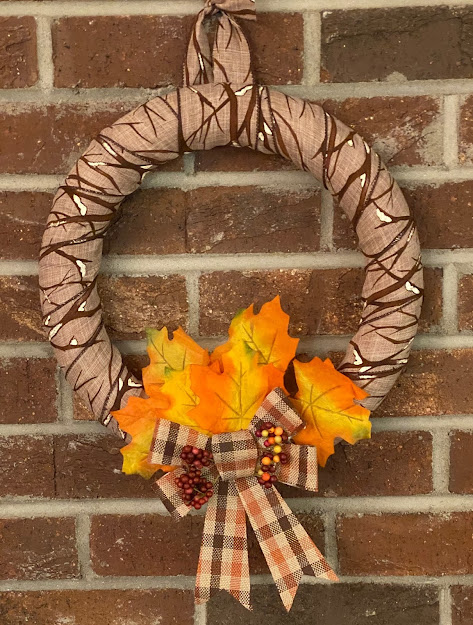 Hello everyone! Today, I'm sharing two easy craft ideas with you. These are both diy and great for Fall decorating. If I can do it, anyone can create this beautiful Fall wreath and some fun fabric pumpkins. So, let's get started! 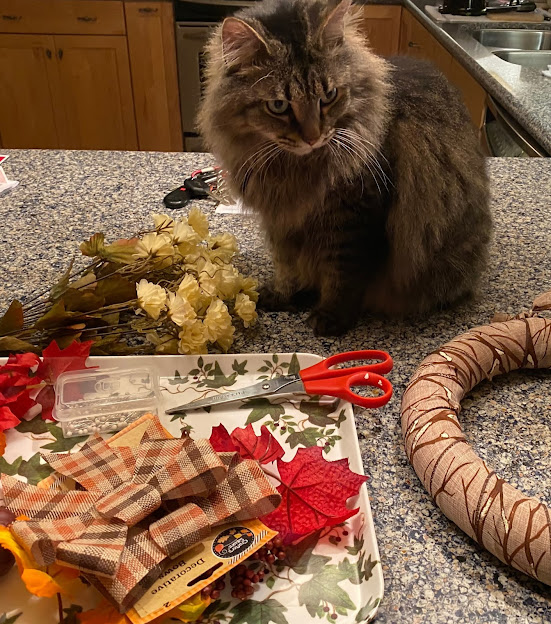 Before starting, I gathered materials I thought I would need on a tray to keep everything neat and tidy. I didn't end up using everything you see on the tray. Sometimes, I create as I go along. Of course, as you can see, I always have my fur assistant nearby. Cassie always stands ready to lend a paw if needed! 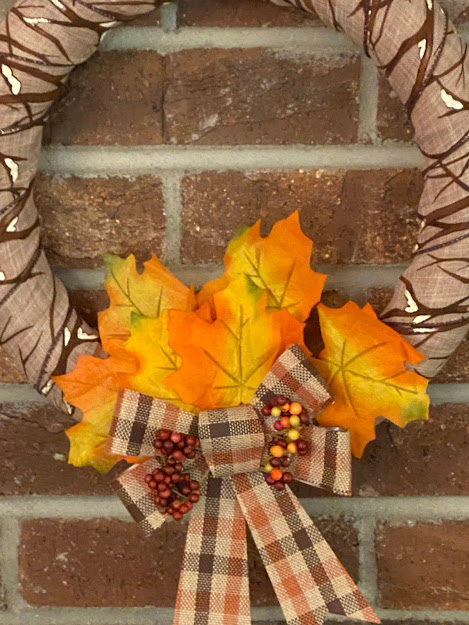 To fashion the wreath, I took some pretty wide brown ribbon with snowy branches and wrapped it around the styrofoam wreath form. When I had wound the ribbon all the way around I secured the end in place with a pin and split the remaining ribbon down the middle and tied it to create the hanger for the wreath. I estimated the amount of ribbon I would need and I estimated pretty closely. It's not a problem if you come up short, however. Just secure the end of your first piece of ribbon with a pin, cut a second piece and continue wrapping. I found the brown/orange plaid bows at The Dollar Store and used one of the bows at the bottom of the wreath securing it under the middle section with a pin. I had bought some Fall color leaf picks at The Dollar Store and I removed the leaves from the stems (easy to do, just pull up on each leaf) and tucked them behind the plaid ribbon, pinning where the pins won't show. The final touch was to tuck in the faux berries (also taken from the leaf picks) into the middle part of the bow. I really like this wreath and am enjoying looking at it hanging in our kitchen on the brick wall! Because the ribbon has branches with snow on them, I can use this wreath through Christmas and the winter. I'll simply remove the leaves and berries and add other touches that fit those seasons as we go along. It may move from the kitchen wall to another part of the house along the way. I love being able to change decor up! Now, let's talk about some paisley pumpkins, shall we? 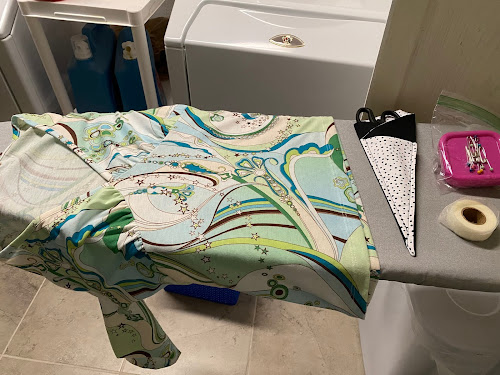 So, this story begins with a Cha Cha Vente paisley top I had ordered from Poshmark in a size medium. Now, I must tell you that I have tried on Cha Cha Vente shirts many times at Stein Mart that were incredibly loose on me. This brand always tends to run large. And, I was sooo excited for this paisley top to come. I had big plans about wearing it! Well, when it arrived and I tried it on it was so tight I could hardly breathe! It fit more like an extra small and yet, the tag said medium. Bummer!! I thought about just putting it in the bag for Goodwill (no returns at Poshmark because something doesn't fit) but I decided, you know what, I paid for this top and I might as well use the material for something I like. So, the idea entered my head to create some paisley pumpkins! 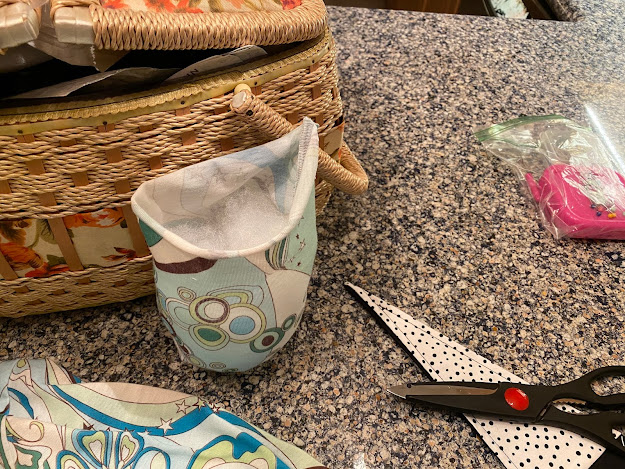 The next step was to fill the pumpkins with polyfil. I kept filling until there was a bit of firmness and the material took on a ball shape. The first pumpkin I made, I secured the top by twisting and fitting a rubberband around it and kind of messed with the fabric to hide the band. The second one, I twisted the top and fashioned a kind of stem and sewed the top closed. My second one looks better than the first but that's true with anything you make. You have more experience! 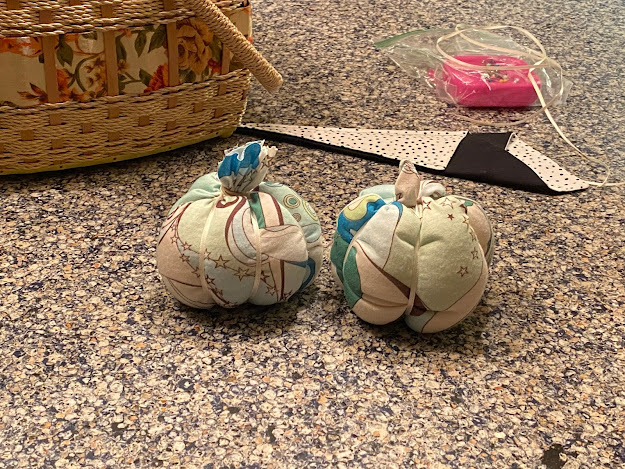 Next, I took thin ribbon and began wrapping around the ball pulling the ribbon tight on each wrap so that the round ball began taking on a pumpkin shape. I roughly divided the ball into six sections and tied off the ribbon. You can then kind of push down on the pumpkin to shape it a bit more. You can see the difference in the pic above between my first and second attempts at these pumpkins. 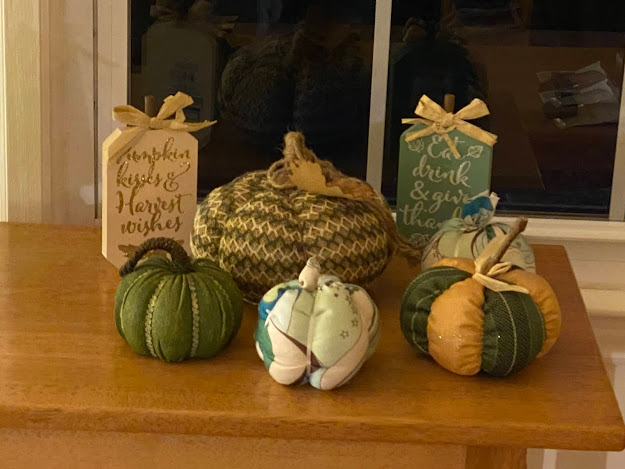 And then, it was time for my paisley pumpkins to join the pumpkin patch in my living room! I had fun making these pumpkins and finding a use for my too small top! When life gives lemons make lemonaide, right?!
Hope you have enjoy my easy diy crafts. Let me know what you are doing in the comments!
Until Next Time,
Debbie

Email ThisBlogThis!Share to TwitterShare to FacebookShare to Pinterest
Labels: Educational Topics, Home Decor and Tablescapes, Things I'm Delighted to Share, This and That Topics

I'm so impressed with how you take an item and totally transform it! Your ideas are wonderful and your end results are just lovely. Your fall wreath is perfect on your brick wall. And those paisley pumpkins are so cute! Paisley is my favorite pattern, so I'm really drawn to those pumpkins you created. Thanks for sharing your projects, Debbie!

How precious Cassie is, waiting to help!! I love their little faces!! You are the queen of clever and innovation Debbie! The wreath is beautiful - just love those snowy branches on the ribbon, and how cool that you can change it up to work for winter also! And your pumpkins are the cutest things! It was such a good idea to use that fabric from the shirt, because they are non-traditional yet still say "fall!" Thank you for sharing your inspiration with us. I have so many fabric scraps and some in fall colors. I'm going to try my hand at some of these little pumpkins!!

WOW, love your wreath & pumpkins. I haven't done much in the 'craft department' in quite a while but those look easy enough to get back into it, especially with changing up the wreath for other holidays.

Unfortunately I don't have any of those supplies laying around anymore and it doesn't look like shopping is in my future anytime soon.
Grace & Peace,Iris
www.IrisOriginalsRamblings.com